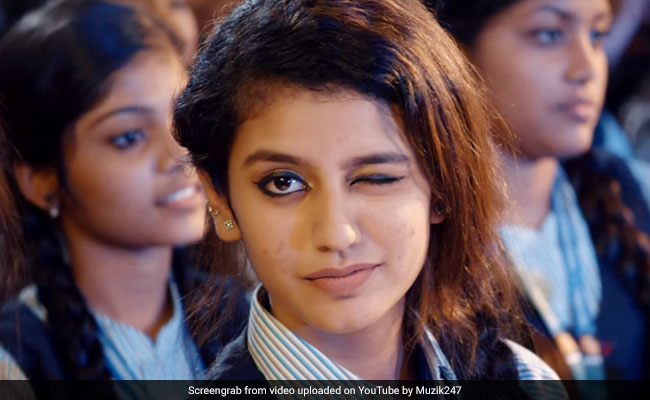 FIRs against Priya Prakash Varrier were filed in Telangana and Maharashtra

New Delhi: Priya Prakash Varrier, the teen Malayalam actor who has charmed the country with her wink and smile in an upcoming movie, has gone to the Supreme Court against a First Information Report (FIR) filed against her and the director of the movie. She is likely to request an urgent hearing by Chief Justice of India Dipak Misra.

FIRs against her were filed by the police in Telangana and Maharashtra, Ms Varrier says in her petition before the top court.

She says the controversy and FIRs are over the lyrics of the song Manikya Malaraya Poovi, which is a Mappila song, or a traditional Muslim song from the Malabar region of Kerala.

"The song describes and praises the love between the Prophet Mohammed and his first wife Khadeeja and this has been misunderstood by the complainants," says the young actor in her petition.

"The song is a folk song and has been in existence for the last 40 years and cherished by the Muslim community of more than one crore in Kerala. The allegation that the song hurts sentiments of Muslims is baseless because there is no FIR in Kerala. People misunderstood the song in non-Malayalam-speaking states," she says in the petition.

A group of young men in Hyderabad filed the case against the filmmakers claiming that the lyrics of the film's teaser song Oru Adaar Love had hurt religious sentiment of Muslims.

Responding to her overnight popularity, Ms Varrier told NDTV that the director wanted to capture "something cute between me and my hero". So she was told to gesture with her eyebrows and wink at him.

But on a complaint, a case was registered last week for "deliberate and malicious acts intended to outrage religious feelings of any class by insulting its religion or religious beliefs".

Promoted
Listen to the latest songs, only on JioSaavn.com
The complaint was by Abdul Muqeet, an engineering student, who claimed that the song makes an "objectionable" reference to Prophet Muhammad's wife.

Another complaint was filed by businessman Zaheer Ali Khan, who demanded that either the song be removed from the film or the lyrics be changed.