The festivities were also attended by Katrina Kaif, Nagarjuna and R Madhavan 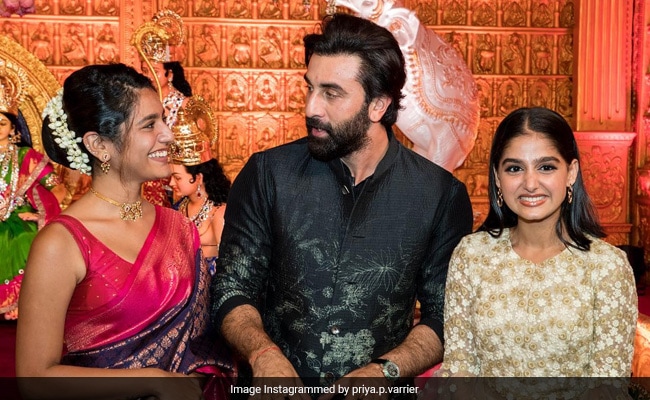 South star Priya Prakash Varrier has shared a set of pictures from a Navratri function hosted by the Kalyanaraman family in Kerala. During the festivities, the actress met some renowned actors, including Ranbir Kapoor, Prithviraj Sukumaran and Jayasurya Jayan. Priya Varrier was quite happy at the event and her “smile says it all”. In the first slide, Priya Varrier is seen smiling ear-to-ear with Ranbir Kapoor and actress Anaswara Rajan. She looks gorgeous in a navy-blue saree with a pink border. The next one shows Priya Varrier sharing the frame with Prithviraj Sukumaran. The actress is seen laughing with all her heart in this pic featuring The Family Man actor Neeraj Madhav, actor-filmmaker Nivin Pauly and Malayalam actress Aparna Balamurali.

Actor-filmmaker Jayasurya Jayan and his wife Saritha Jayasurya, and Joju George were also part of the get-together. Sharing the pictures from the “auspicious Navratri festivities,” Priya Prakash Varrier wrote, “Had the opportunity of meeting some fine artists which added to the celebration. It was such a special night. PS: My smile says it all.”

The festivities were also attended by Katrina Kaif, Nagarjuna and R Madhavan, among others but more on that later. The Kalyanaraman family is the owner of a popular jewellery brand, Kalyan, and every year they host a star-studded Navratri puja at their house.

The Kalyanaraman family had also invited Katrina Kaif to the Navratri celebrations. Photos of Katrina Kaif and ex-boyfriend Ranbir Kapoor at the event also trended incessantly on social media. Also spotted at the festivities were stars such as Jayaram, Regina Cassandra and Amala Akkineni. Take a look:

In Jayasurya Jayan and his wife's photo albums, we loved glimpses of R Madhavan, director Priyadarshan and others.

Priya Prakash Varrier's wink scene in the film Oru Adaar Love made her an overnight sensation. She has also worked in movies like Check and Ishq.