Sabarimala temple: Today is the fourth day since the temple was opened after the Supreme Court last month overturned a centuries-old ban on women between 10 and 50 years entering Sabarimala A 38-year-old woman from Kerala who was planning to visit the Sabarimala temple has aborted her plans for the trek today after heavy rain in the area. Manju, arrived at the Pamba base camp this morning and was to start trekking the last 5-km to the Sabarimala temple, where protesters are lying in wait to stop any attempt by women of menstruating age to enter the shrine of Lord Ayyappa nestled in the Western Ghats.

Manju, general secretary of the Kerala Dalit Mahila Federation, has asked for police protection. The police, however, said a decision on giving her security for tomorrow morning will depend upon a background check. Police sources said the woman has a few cases against her and alleged links to a radical organisation.

If she gets the security, Manju will have to walk the muddy uphill path surrounded by a group of policemen in riot gear. If she succeeds in entering the temple, she will make history.

Saturday was the fourth day since the temple was opened after the Supreme Court last month overturned a centuries-old ban on women between 10 and 50 years entering Sabarimala. No woman in this age group has made it to the temple.

This afternoon, high drama unfolded outside the temple when a woman from Tamil Nadu was stopped from entering the compound by devotees who thought she was under 50. They let her walk up the 18 golden steps that lead to the shrine of Lord Ayyappa only after checking her identity paper with her date of birth mentioned on it.

Carrying the traditional prayer kit irumudikkettu offered to Lord Ayyappa, Trichy resident Latha who trekked up with her family was near the temple when some protesting devotees saw her and formed a wall, blocking her way. Latha, tears in her eyes, showed her identity card to prove her age. "This is my second pilgrimage to Sabarimala. I came here last year too," she said. 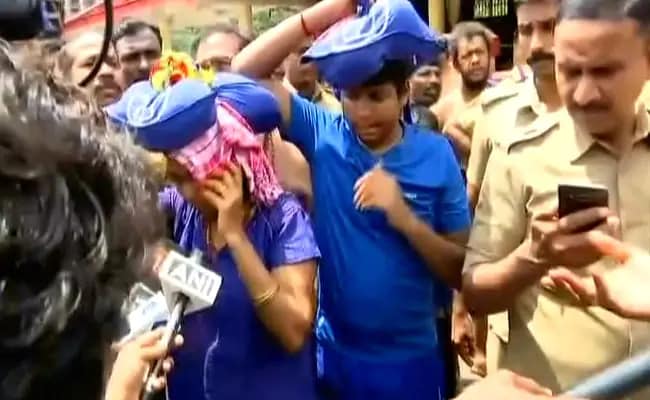 A court today denied bail to activist Rahul Easwar, who was arrested on Wednesday for allegedly attacking some women at the Nilakkal base camp. He has denied the allegations. The next hearing is on October 22.

Kerala Inspector General S Sreejith, who on Friday led the police team that formed a protective ring around the two women, Hyderabad journalist Kavitha Thakkal and Kochi resident Rehana Fatima, said the police will provide all the protection devotees need to trek up to the temple. "... But darshan is something which can be done with consent of the priest. We will give them whatever protection they want," Mr Sreejith said.