Will Decide Seat-Sharing For Lok Sabha Polls In 3 Days: Siddaramaiah

Ruling out any threat to the HD Kumaraswamy-led government amid alleged attempts by the BJP to topple it, the former Chief Minister said both parties will face the polls together. 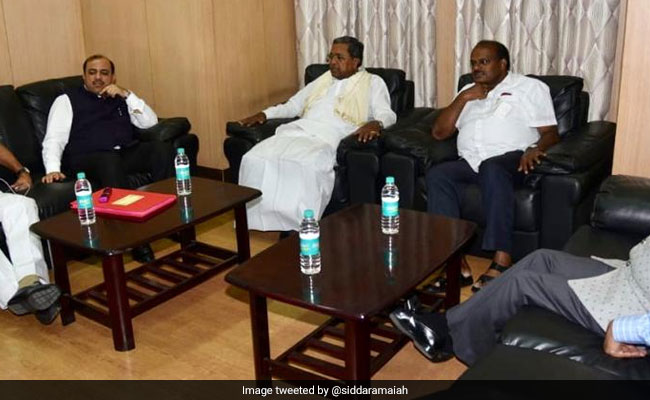 On seats demanded by JD(S), Siddaramaiah said it has not been discussed.

The ruling Congress-JD(S) coalition in Karnataka will take a decision on seat sharing for the coming Lok Sabha elections in three or four days, coalition coordination committee chairman Siddaramaiah said on Thursday.

Ruling out any threat to the HD Kumaraswamy-led government amid alleged attempts by the BJP to topple it, the former Chief Minister said both parties will face the polls together.

Preliminary discussions have been held on Lok Sabha elections and a meeting will be held in three or four days to decide on the constituencies, he said.

"..keeping in mind the situation in the constituencies, we will decide," Siddaramaiah told reporters after the coordination committee meeting in Bengaluru.

Former Prime Minister and JD(S) supremo HD Deve Gowda will also be part of that meeting, and it has been decided both parties will go together for the polls, he said.

On seats demanded by JD(S), Siddaramaiah said it has not been discussed.

"...we will decide on seats and other things in the next meeting," he said.

Responding to a question about opinion within the Congress not to give up seats where the party has sitting MPs, he said "We have not discussed it."

JD(S) secretary general Danish Ali said "We only started a preliminary discussion on seat sharing, the process will continue and it will take many rounds to have a pre-poll alliance for Lok Sabha seats. It will take some time.

There is no demand, our common motive is to get the maximum seats to the coalition in Karnataka and reduce the BJP to minimum. We will put winning candidate and make him contest," he said.

Their expectation is JD(S)-Congress would win 25 plus out of 28 seats in Karnataka, he said.

JD(S) has already expressed its desire to contest in 12 seats, on which the Congress party has some reservations.

The Congress has said seat sharing will be on ''candidate-merit'' basis. Also, several senior Congress leaders and MPs, including Veerappa Moily, have reportedly asked the leadership not to cede nine seats where the party has its sitting MPs, to JD(S).

There are also voices with in the party not to field sitting MPs in certain constituencies.

"There is no situation that will cause any threat to the government," he asserted.

Pointing out that as CLP leader he had called a legislature party meeting and four MLAs -- Ramesh Jarkiholi, B Nagendra, Umesh Jadhav and Mahesh Kumatahalli, had skipped the meeting to whom notices were issued, he said, "out of them three have responded."

"Nagendra has sent his response yesterday, today Ramesh and Mahesh have responded, one more Umesh Jadhav is yet to respond..
Nagendra''s response I have seen, he has said he is loyal to the party and because of some case hearing in court, he could not respond. He has not met BJP leaders among other things."

"Other two responses I'm yet to see.. after seeing the other replies, we will decide on what action to be taken," Siddaramaiah added.

Terming the alleged brawl between two MLAs Ganesh and Anand Singh at a resort here as "unwanted incident", Siddaramaiah said it will not reflect on the whole government.

"I'm not defending this quarrel between two MLAs, I have said let law take its course. Our party has also taken action already. An inquiry committee has also been formed under the Chairmanship of Deputy Chief Minister.

Both disciplinary and criminal action have also been initiated," he said.

Ruling out any ''operation lotus'', the former Chief Minister said it was only a creation of the BJP "because of their illusion, by offering power and money."

On reports about BJP planning to bring no-trust motion against the coalition government during the coming assembly session, he said, "let them do whatever they want, we are ready to face. They have already failed miserably once."

Noting that the meeting also discussed the budget that is slated to be presented on February 8, Siddaramaiah said, "there is common minimum programme, keeping it as the base budget will be prepared."

On appointment of Chairmans to few boards and corporations that has been held back like Venkataramanaiah to KRDCL, Sudhakar for Pollution Control Board and Gopala Swamy as parliamentary Secretary, Siddaramaiah said "We have asked the Chief Minister to issue the orders, he will consider it."

"There are few more MLAs whom we will recommend to boards and corporations, we have requested the Chief Minister to issue the orders to them at the earliest, he said, adding that issues of some MLAs on constituency and development related works have also been discussed.

The coordination committee discussed the drought situation in the state and steps being taken by the government to manage the situation, Siddaramaiah said.