Rajinikanth Backs Kamal Haasan On Reaching Out To Kumaraswamy On Cauvery

Rajinikanth said he did not see anything wrong in Kamal Haasan reaching out to HD Kumaraswamy on the issue. 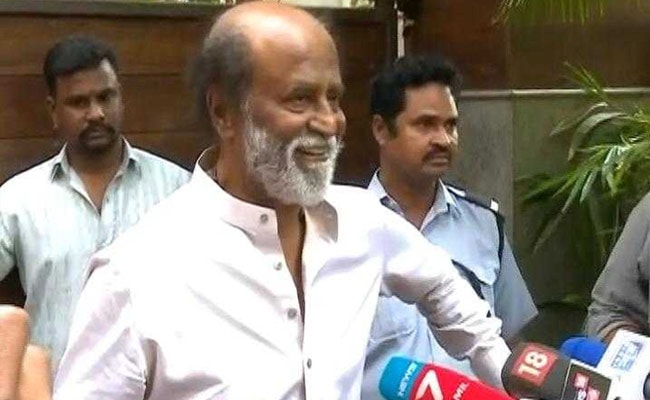 The Tamil superstar, who is set to enter politics, said he did not see anything wrong in Haasan reaching out to Mr Kumaraswamy on the issue.

General secretary of the Tamil Nadu Cauvery Delta Farmers Welfare Association, Mannargudi S Ranganathan, wondered why Haasan should now pich for talks with Karnataka when the Cauvery Management Authority has been set up after decades-long legal battle.

"Supreme Court is the highest court of the country and its orders on the issue, the Cauvery water release should be followed by everyone," he told PTI.

The farmer leader said at a time when the top court concluded the matter by giving its ruling, suggesting holding talks again on the very same issue was tantamount to contempt of court.

The Mannargudi based 85-year old veteran, who initiated legal battle decades ago on the issue in the apex court, said several rounds of talks in the past with Karnataka failed to yield any results.

Mr Ranganathan said for the past several years Delta farmers could not raise 'Kuruvai' crop and appealed to authorities to release water at least by the third week of June to enable them to raise the crop.

Vice president of the association, Magadanapuram V Rajaram said Mr Haasan should not poke his nose in such "crucial issues."

President, National South Indian Rivers Inter-Linking Farmers Association, P Ayyakannu, who spearheaded protests in Delhi over farmers issues, said,"farmers need water...it's okay with us if we get water from Karnataka through anyone's efforts whether it Mr Haasan or anyone else."

President of Coordination Committee of All Tamil Nadu farmers association PR Pandian said "it is unacceptable, what Mr Haasan has done is against the Supreme Court verdict."

Condemning the move, he said "it is a betrayal of Tamil Nadu," and asked how could the actor-turned politician pitch for talks when it has been decided by farmers that there shall be no more talks.

Promoted
Listen to the latest songs, only on JioSaavn.com
Mr Haasan had said yesterday it was only people-to-people contact that can resolve the Cauvery issue.

"I see hope in the conversation I had with him (Kumaraswamy) and that's more important.The way forward will be found by people with a mindset to go forward," Haasan had said after meeting Mr Kumaraswamy.
Comments
RajinikanthKamal HaasanCauvery issue

Any Decision On Bengaluru Lockdown Only After Consulting Experts: Karnataka Ministers