The building crumbled in Dharwad's Kumareshwar Nagar, about 400 kilometres north of Bengaluru on Tuesday evening. 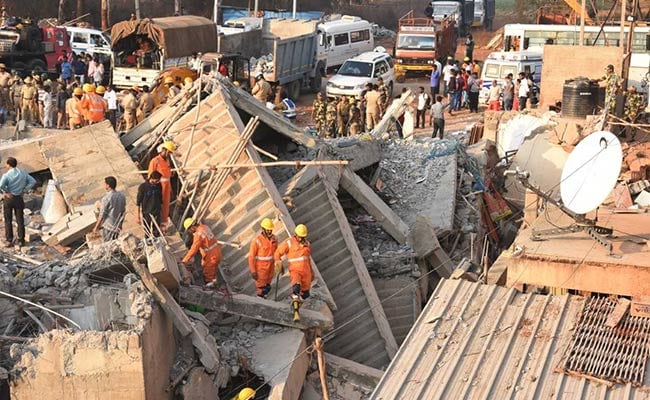 A thick blanket of dust and debris engulfed the area after the building collapse.

The number of deaths in the under-construction building collapse in Karnataka's Dharwad has risen to seven, Director General of Fire and Emergency Services MN Reddy told NDTV. Fifteen people are also still feared trapped under the debris.

The building crumbled in Dharwad's Kumareshwar Nagar, about 400 kilometres north of Bengaluru on Tuesday evening.

Around 55 people have been rescued from under the rubble.

A case has been registered and no arrests have been made so far. The focus currently is on the rescue operations, Hubballi-Dharwad Commissioner of Police MN Nagaraj said.

An eye-witness had alleged that the building did not have the capacity to bear four storeys whereas an extra floor was being added. He said "the builders had used substandard materials" for the construction as well.

Most of those trapped were migrant labourers from north India who were engaged in laying tiles.

Chief Minister HD Kumaraswamy urged locals not to panic and said rescue operations are being supervised.