The BJP in Karnataka questions the timing of the two complaints against BS Yeddyurappa which were filed just ahead of a protest led by him targeting ministers accused of corruption in the Congress government. 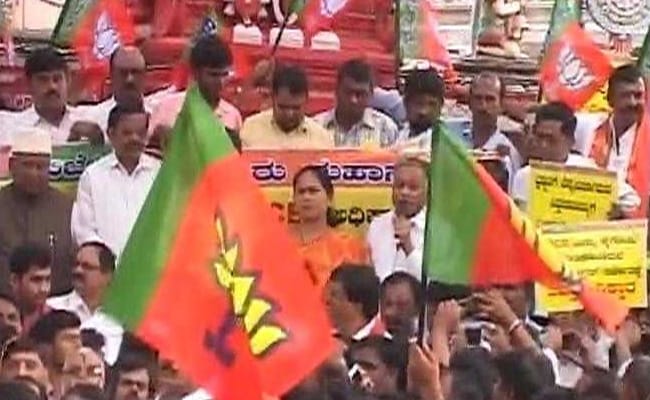 Karnataka BJP leaders and workers protested against the Siddaramaiah government.

Bengaluru: BJP leaders and workers protested in Bengaluru today against what they said was the misuse of the anti-corruption bureau of Karnataka and "political vendetta" by the ruling Congress government in the state.

Last week, former chief minister BS Yeddyurappa and senior BJP leader BS Yeddyurappa was named in two complaints filed by the Anti-Corruption Bureau of Karnataka. The First Information Reports or FIRs name Mr Yeddyurappa in a land de-notification issue. The agency has alleged that when he was the chief minister, Mr Yeddyurappa, 74, was party to the de-notification of land in north Bengaluru that was meant to be part of a Bangalore Development Authority (BDA) residential area called the Shivaram Karanth Layout.

The land was then allegedly sold at a much higher price to private players. This was said to have deprived the state government of revenue. It is said that up to 257 acres were involved in the land deals near Yelahanka in north Bengaluru.

But the BJP has alleged that the move is politically motivated. At the protest, BJP leaders also pointed out how another accused in the complaints that name Mr Yeddyurappa, the then Special Land Acquisition  Officer of the BDA, H Basavarajendra, said he had been pressurised by the state anti-corruption agency to accuse the former chief minister of wrong-doing.  In a letter written by the officer, copies of which are with NDTV, addressed to the National Human Rights Commission, the Governor and the Chief Secretary, he said he was named as an accused because he refused to do so.

Former home minister, the BJP's R Ashok said, "Already the government officer is saying Siddaramaiah and other officers were forcing me to give against Yeddyurappa. Siddaramaiah is head of the ACB and he is misusing ACB and forcing the officers to prosecute Yeddyurappa. This is 100% political vendetta. We demand the resignation of Siddaramaiah."

Yeddyurappa aide and former minister, Shoba Karandlaje said the cases against the former chief minister were filed despite the Karnataka High Court quashing the notification. "They are fixing cases against the opposition...The BJP is with Yeddyurappaji and all across Karnataka, we are protesting against the political vendetta of the government. The entire bureaucratic system is being misused by ACB and Siddaramaiah.

Earlier, the Congress had said that the timing of Income Tax raids earlier this month on a powerful minister in the Siddaramaiah cabinet, DK Shivakumar, was politically motivated - he was looking after Congress legislators from Gujarat brought to Bengaluru ahead of Rajya Sabha election.