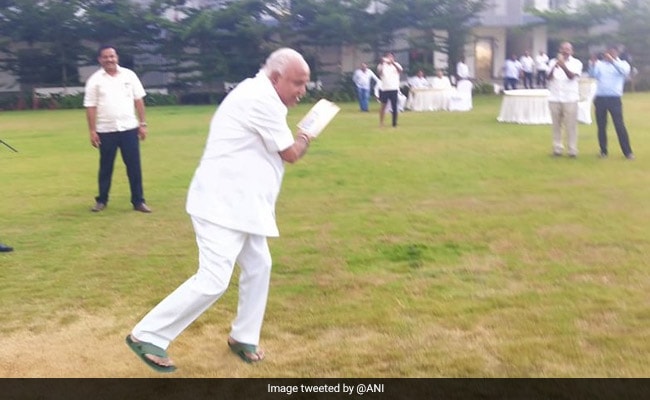 As the focus Tuesday shifted to the Supreme Court, which is hearing the pleas of 15 Karnataka MLAs against alleged delay by the Speaker in accepting their resignations, the state BJP President BS Yeddyurappa was seen in a relaxed mood playing cricket with party legislators who are camped at a resort on the outskirts of the city.

Mr Yeddyurappa, who had been busy in hectic meetings with senior party colleagues and legislators strategising as the wobbly coalition government headed by Chief Minister HD Kumaraswamy is on the brink of collapse, Tuesday spent most part of the day at a resort near Yelahanka.

Later in the day, BJPs state unit media cell released a photo of Mr Yeddyurappa playing cricket with party MLAs Renukacharya and SR Vishwanath, among others.

He was seen batting.

After over a week long heightened political activity in the city, it was relatively a calm on Tuesday with the focus shifting to the Supreme Court.

The top court will pronounce its order Wednesday morning on the pleas of 15 rebel Congress-JD(S) MLAs seeking direction for Speaker Ramesh Kumar to accept their resignations from the Assembly.

The order from the top court will come a day before the Congress-JD(S) government faces the floor test in the assembly, which would end suspense over the numbers game triggered by a raft of resignations by the ruling coalition lawmakers.

As many as 16 MLAs -- 13 from the Congress and three from JD(S) -- have resigned while two independent MLAs S Shankar and H Nagesh have withdrawn their support to the coalition government, keeping it on the edge.

In a bid to keep their flock together ahead of the floor test, the Congress, BJP and JD(S) have shifted their MLAs to resorts.

The Congress Tuesday shifted its MLAs from a hotel in the city to a resort on the outskirts, amid fears that some more legislators may resign.