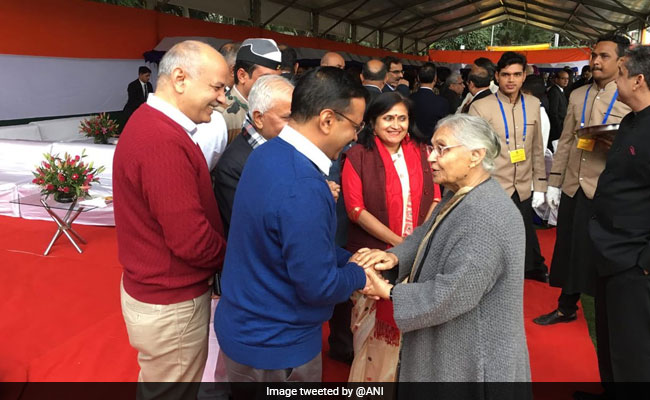 Arvind Kejriwal had surprised Sheila Dikshit with a visit before she was to fly to France for a surgery.

Will they or won't they? Suspense over a partnership between the two anti-BJP parties -- the Congress and the Aam Aadmi Party (AAP) -- ahead of the national election notched up when Delhi Chief Minister Arvind Kejriwal and his predecessor Sheila Dikshit shook hands and grinned from ear to ear at an event at Lieutenant Governor Anil Baijal's home.

The photogs lapped up the opportunity to freeze some happy frames, which could come in handy in case the two political opponents eventually decide to give it (an alliance) a go.

Even though the two leaders have almost always criticised each other, the AAP chief surprised the veteran Congress leader with a visit before she was to fly to France for a surgery in August.

A similar photograph of Congress chief Rahul Gandhi and Arvind Kejriwal from a massive farmers' rally in the national capital last year had fuelled talks about a possible collaboration in Delhi. Both the leaders were at the time participating in various meetings of opposition parties working towards forming a group that could fight the ruling BJP.

Arvind Kejriwal was urged to drop his anti-Congress stance by Tamil Nadu politician MK Stalin, who met him after discussions with Rahul Gandhi.

"Don't keep a negative stance against the Congress. The country needs a mahagatbandhan (grand alliance) and you have a role in it," Mr Stalin reportedly told Mr Kejriwal.

But the AAP complained that the Congress never reached out to it.

While both the parties have repeatedly ruled out a coalition and even urged voters not to support the other party, nothing is set in stone.

Mr Kejriwal had formed his first government in 2013 with outside support from the Congress. However, it came to a rapid end after 49 days. Since then, the state Congress leaders have unfailingly attacked the AAP leader.

When asked about the AAP's declaration that it will not tie up with the Congress in Delhi, Haryana and Punjab, the 80-year-old said that it was her party which took the call of going it alone in Delhi.

Ms Dikshit, who was recently brought in to steer the Congress as the chief of its Delhi unit, dismissed the AAP's call as "something which they are just repeating. They only said what we have already said".

"I have said it many times. There was no question of an alliance with the AAP. I have had this feeling all along. My experience with them is that they are unreliable," she said.

The Congress's response was off-putting for the AAP, which said that "it was ready to drink poison (compromise with the Congress), but it was no longer a possibility.

"Several like-minded parties were coming together and even though not being in favour of Congress, they have decided to join hands. We, too, were ready to think about joining hands to save the nation from the dictatorship of (Narendra) Modi-(Amit) Shah. But the way Sheila Dikshit said that the AAP is a small party unlike Congress which is a national party and they will not have any sort of compromise with us," AAP leader Gopal Rai said.

But the three-time chief minister of Delhi said the way they (the AAP) talked about Rajiv Gandhi in the Delhi assembly... "we were hurt and it was not right".

In December, the Delhi Assembly adopted by voice vote a resolution which called for speedy trial of cases and termed anti-Sikh riots as genocide. AAP leader Jarnail Singh, while moving the resolution, had said former Prime Minister Rajiv Gandhi be stripped of his Bharat Ratna. Mr Singh had later said that the resolution was adopted.

But it triggered a controversy, prompting the assembly speaker to say that the resolution was not adopted as Mr Singh did not inform the House in advance.

The Congress had been in talks with several regional parties for a pan-India, anti-BJP alliance for Lok Sabha elections. But latest reports suggest that the Congress will go solo in many states, including Uttar Pradesh, West Bengal, Telangana and Andhra Pradesh.