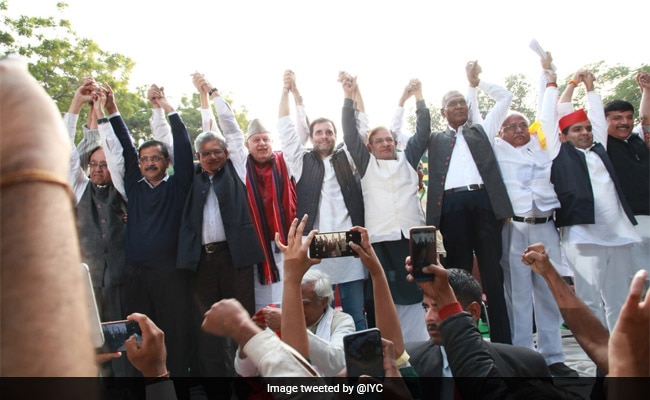 Both were part of the chain of leaders who linked their hands and held them up in a show of bonhomie.

Rahul Gandhi and Arvind Kejriwal were on the same stage for the first time as opposition leaders attended a massive farmer protest in Delhi today, just months before a national election where their unity against the ruling BJP will be tested.

Both were part of the chain of leaders who linked their hands and held them up in a show of bonhomie. The Congress president and Aam Aadmi Party chief were separated only by Left leader Sitaram Yechuri and National Conference's Farooq Abdullah.

Arvind Kejriwal began his political career from the same spot in the heart of Delhi, campaigning aggressively against the previous Congress government.

"Many parties here are of differing ideologies," said Rahul Gandhi, addressing tens of thousands of farmers at a protest site about a km from parliament.

Speaking moments later, Mr Kejriwal said Prime Minister Narendra Modi had "stabbed farmers in the back" by not keeping his 2014 promises.

AAP presents a dilemma for the Congress as its intense rivalry with the party in Delhi clashes with its efforts to rally opposition forces for a united fight against the BJP in 2019.