Karnataka Assembly Speaker KR Ramesh Kumar on Sunday disqualified 14 more rebel MLAs under the anti-defection law till the end of the current term of the House in 2023. 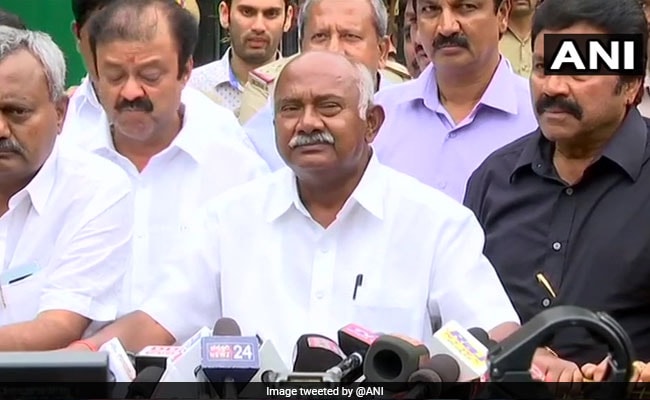 AH Vishwanath alleged the disqualification was against the law. (File photo)

Rebel Janata Dal Secular lawmaker AH Vishwanath, who was disqualified by the Karnataka Speaker on Sunday, said the decision was "against the law", adding he and other disqualified legislators would approach the Supreme Court for redressal today.

Karnataka Assembly Speaker KR Ramesh Kumar on Sunday disqualified 14 more rebel MLAs -- 11 from the Congress and three from the JDS -- under the anti-defection law till the end of the current term of the House in 2023.

"The disqualification is against the law... just under a whip served on them, you cannot force the legislators to come to the House," Mr Vishwanath told news agency Press Trust of India over phone.

"The speaker has disqualified 20 members of the legislature on the grounds that they have not attended the House... so against this decision pronounced by the Speaker, we are approaching the Supreme Court on Monday," the MLA said from an undisclosed location.

The disqualifications came a day ahead of Chief Minister BS Yediyurappa seeking the trust vote in the assembly to prove his majority.

In Bengaluru, disqualified rebel lawmaker from Maski Pratap Gowda Patil asked voters in a video message to not panic and said they were confident of emerging victorious in the Supreme Court.

"Dear voters and my well wishers, the Speaker has ordered my disqualification from the assembly... there is no need to panic. We are challenging this in the Supreme Court.

"I am confident we will be victorious in the court," Mr Patil said.

Speaking to a local news channel, another disqualified MLA Munirathana said they were aware that they would be disqualified as Congress leaders had threatened them about it.

"... our own party leaders had said we will disqualify if you if (you) go out... we are not small children or we have not gone out without knowledge of others," he said, adding that they would challenge the action legally.

Alleging that many Congress leaders wanted the coalition government in Karnataka to come to an end but did not act upon it, Munirathna alleged that leaders within his party did not even cooperate with JDS' HD Kumaraswamy to run the government smoothly.

"They (Congress leaders) are playing a game now, to show that they were loyal to JDS... we will reveal everything to people in the coming days," he added.

Shivaram Hebbar, who represented Karnataka's Yellapur seat, alleged in a Facebook post that the Speaker's decision to disqualify the rebel lawmakers was done in a "partisan" manner under pressure, adding the matter would soon reach the Supreme Court.

"I will soon reveal to you the reasons for my decisions and will take further steps after consulting you," he said in the post addressed to voters and his supporters.

The Congress and the JDS, whose government collapsed on Tuesday last week after rebellion by a section of their lawmakers, had made petitions to the speaker to disqualify their errant members.