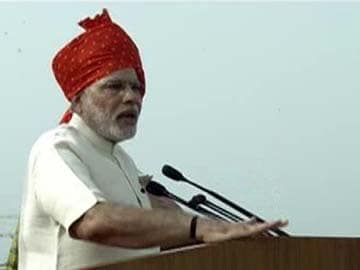 New Delhi: Prime Minister Narendra Modi has pledged to give bank accounts to all Indians, but experts say taking banking to rural areas where many people have no identity papers will be a huge challenge.

Unlike developed nations, where there are bank branches everywhere, banking services in India leave out nearly half the 1.2 billion population, putting poor people at the mercy of moneylenders who charge usurious interest for emergency loans for sickness or routine purchases such as buying seeds.

"Why are our farmers committing suicide? It's because they have to take money at huge interest rates from the moneylenders," Mr Modi said in his first annual Independence Day speech.

Just 145 million of India's 247 million households have access to a bank account, census figures show. According to the World Bank, 73 percent of farmers have no formal source of credit.

While the drive for universal banking access dates back decades, India is still far from its goal. Now Mr Modi is taking a personal stake in the quest.

"We want to integrate the poorest of the poor with bank accounts," the Prime Minister said in his August 15 speech, remarking that while there has been a telecommunications revolution in India, there has been no similar banking revolution.

"There are millions of families who have mobile phones but no bank accounts. We have to change this scenario," said Mr Modi, who aims to provide bank accounts to 75 million more households by 2018, and to have two account-holders per household.

"India is at a crossroads with a unique opportunity to re-invent its approach to financial inclusion," said Vijay Advani, executive vice-president of Franklin Templeton Investments.

Mr Modi is pushing to transform India into a modern economy where money goes from account to account rather than pocket to pocket. Under his scheme, each account-holder would also get a debit card and a 100,000-rupee ($1,600) sickness insurance policy.

Reserve Bank of India governor Raghuram Rajan has said the scheme will set the poor on the road to "economic independence", supplying insurance and providing credit to entrepreneurs.

The government and central bank will start by encouraging more ATMs and mobile banking, and will promote a new breed of "simple banks" focused on deposits and payments.

But there are many hurdles to achieving Mr Modi's goal, among them a lack of identity documents. Would-be bank customers have to produce a host of documents from birth certificates to residence proofs that many poor Indians do not possess.

"I'd like my own bank account but I have to use a friend's account to save -- I don't have the papers," said Pushpa Kumari, who runs an at-home Delhi manicure service.

"For the common man, the opening of a bank account is a Herculean task," said N.S.N. Reddy, chief manager of the state-run Andhra Bank.

Mr Rajan has said banks would use "unique biometric identifiers", a programme launched by the previous government.

Increasing the ranks of account-holders will also help India achieve its aim of transforming the subsidy and distribution scheme for food, fuel and fertiliser into cash payments.

Right now, many of India's so-called "unbanked" store their savings by investing in gold jewelry and bars. Indians have one of the world's highest household savings rates, but the central bank says just 35 percent of these savings go into the banking system.

Microfinance institutions, which loan small sums to those unable to get credit from mainstream banks, have sought to step into the breach, but have been criticised for exorbitant lending rates.

Promoted
Listen to the latest songs, only on JioSaavn.com
Analysts say India's public and private banks, saddled with bad loans as a result of an economic slowdown, will need incentives and financial support to extend services in rural areas which they have so far found mainly unprofitable.

A lot depends on "how effectively the government is able to scale up participation from the private, public and social sectors", said Mr Advani of Franklin Templeton Investments.
Comments
Indiabank accountsNarendra Modi