What Malaika Arora Is Doing In Her 'Favourite City.' Pics Here

Malaika made a pit stop in New York after enjoying the sun, sea and sand with part of the Khan-daan in Spain earlier 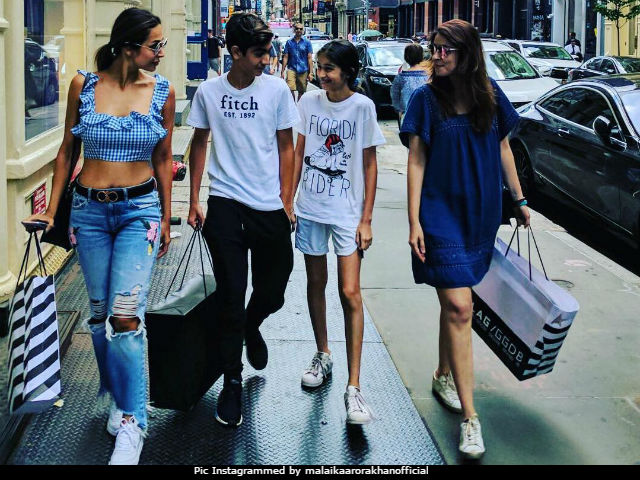 New Delhi: Malaika Arora is doing it again. On Instagram, she's posting pictures from her New York vacation that will result in a uber stylish holiday album. The Big Apple is her 'favourite city', she had mentioned in a previous post, and her Instagram feed is our favourite. Malaika made a pit stop in New York after enjoying the sun, sea and sand with part of the Khan-daan in Spain earlier. Her teenaged son Arhaan accompanied her to New York, with whom she also embarked on a shopping spree in New York. Joining Malaika and Arhaan were Chunkey Pandey's wife Bhavana and younger daughter Rysa. One of the pictures tell us it was a shopping kind of a day while another one is the result of a happy Sunday brunch. "After effects of a Sunday brunch," Malaika captioned one picture while for another, she wrote: "Some serious post shopping discussions."

After effects of a Sunday brunch #nyci u

Promoted
Listen to the latest songs, only on JioSaavn.com
Here are some more pictures from her vacation diary, which include her her fam-jam with the Khan-daan in the Spanish island Mallorca. Malaika went on the trip right after Eid celebrations along with Arhaan, ex-husband Arbaaz Khan, Sohail Khan and his wife Seema Khan. Malaika and Arbaaz, who divorced in 2016, continue to be spotted at the same get-togethers, family meets and even in holiday photos.

A post shared by Malaika Arora Khan (@malaikaarorakhanofficial) on Jul 8, 2017 at 4:07am PDT

Malaika Arora has starred in movies like Housefull, the Dabangg series of films and Welcome. She is best known for dance numbers like Chaiyya Chaiyya and Munni Badnaam Hui. Malaika was last seen as a judge on reality TV show Jhalak Dikhhla Jaa 4.