What If Justin Bieber Was A Marathi Royal? See Pic

Justin Bieber in India: Twitter shows how he would have looked in a traditional Marathi head pheta and a moustache and jewellery and the unmissable crescent moon-shaped tika 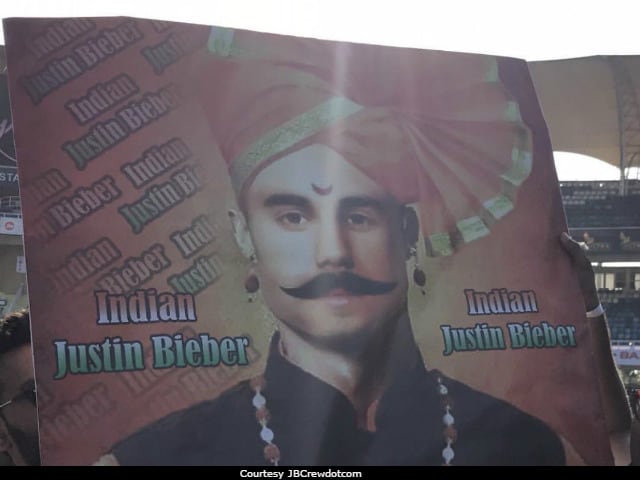 Justin Bieber as seen on a poster (courtesy JBCrewdotcom)

New Delhi: The extent of the Bieber-Fever ahead of Justin Bieber's maiden concert in India lead to a surge in the creativity of his fans in Mumbai. What if Justin Bieber was a Marathi royal? Twitter shows how he would have looked in a traditional Marathi head pheta and a moustache and jewellery and the unmissable crescent moon-shaped tika. A fan club of the Baby singer has dug up and shared a poster welcoming Justin Bieber, in which the Sorry singer features as what looks like a Marathi royal. It was a very Marathi welcome, we must say. Whether the 23-year-old pop sensation saw himself on the poster or not is not sure but he definitely got a glimpse of his crazy fan following in India, during his maiden gig.

So, how do you like this desi version of Justin Bieber?

Indian Justin Bieber #PurposeWorldTour 2017 in Mumbai. There are no words... pic.twitter.com/ADMqJJYAAy

Talking about a grand welcome, Justin Bieber was greeted with crowd of cheering fans at Mumbai's Kalina airport, where his chartered flight landed early on Wednesday night. His concert was attended by an audience comprising over 45,000 'Beliebers', which included Bollywood celebrities like Alia Bhatt, Huma Qureshi and Pooja Hegde. Meanwhile, stars like Sridevi, Malaika Arora, Raveena Tandon and Arjun Rampal enjoyed the concert with their children and so did business tycoon Robert Vadra.

Promoted
Listen to the latest songs, only on JioSaavn.com
During his concert at Mumbai's DY Patil stadium on Wednesday evening, Bieber said that the show will find place in his heart as "one of the best nights" ever. Mumbai responded to his emotion singing along to tracks like Baby and Love Yourself. It was magical. Bieber, who was driven around in a Rolls Royce vehicle in Mumbai, also visited the underprivileged children on Mumbai slums during the day.

Justin Bieber's Mumbai concert was as part of his Purpose World Tour and the next stop is Johannesburg, Africa.