Inside Justin Bieber's Concert: He Sang Baby, Sorry And Everything In Between

Justin Bieber India Concert: The 45,000-strong crowd was composed mainly of teenaged 'Beliebers,' some chaperoned by their parent New Delhi: Justin Bieber created a magical atmosphere (the sort only he can) at Mumbai's DY Patil Stadium on Wednesday evening. The 23-year-old singer opened his debut gig in Mumbai by going straight into his hit songs Mark My Words, Where Are You Now and Get Used To It, with a cheering crowd of 'Beliebers' singing along with him. He was dressed in signature style - a white tee and casual pants. That's so Bieber. "The sun shines differently here. It's an amazing night, thank you for having me," Justin Bieber told his audience. His set list included his popular hits like Boyfriend, What Do You Mean?, Company and No Pressure. Midway, he sang Baby, the song responsible for the start of Bieber-Fever.

Justin Bieber wrapped his debut concert in India with a crowd-pleasing performance to the very popular Sorry. In between his songs, he thanked the audience saying: "What a beautiful night tonight. Honoured to be here. You guys are the coolest. Hope you're ready to have the best night," reported news agency PTI. Meanwhile, we can completely understand the reason behind Justin Bieber's confession - "Tonight's turning out to be one of the best nights of my life" - which he said mid-way through the show.

Here are pictures and videos from inside the Justin Bieber concert:

(23) Another video of Justin Bieber onstage performing at the #PurposeTour in Mumbai, India. (May 10) pic.twitter.com/DDoNT1cjXU

(22) Another video of Justin Bieber onstage performing at the #PurposeTour in Mumbai, India. (May 10) pic.twitter.com/KzfyNMvziC 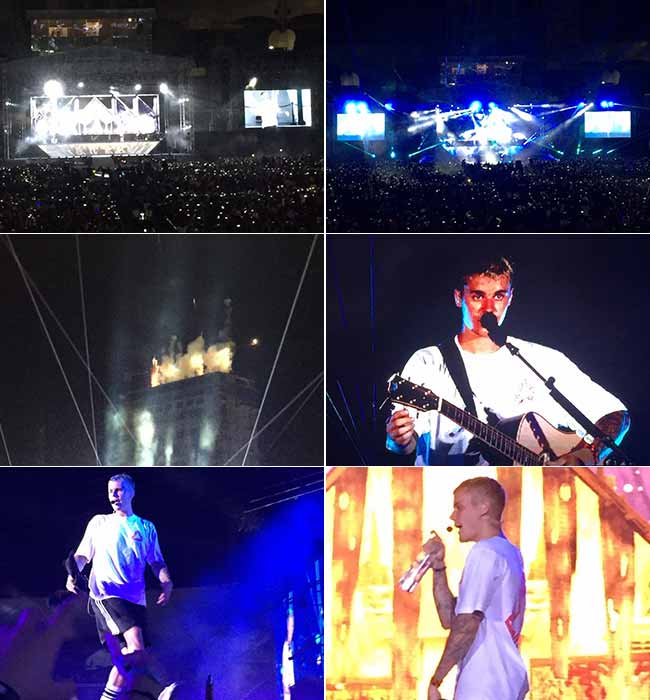 The 45,000-strong crowd was composed mainly of teenaged 'Beliebers,' some chaperoned by their parents. Several celebrities were spotted as well - Sridevi with her daughters, Alia Bhatt, Raveena Tandon, Malaika Arora, Sonali Bendre, Arjun Rampal and others. At 24, Alia is likely a 'Belieber' - most other stars were shepherding young charges.

Justin Bieber was preceded by opening acts by Sartek, Zaeden and Alan Walker. Gates at the D Y Patil Stadium opened at 2 pm - there were queues waiting to collect tickets from 9 am.

Promoted
Listen to the latest songs, only on JioSaavn.com
Justin Bieber, 23, landed in Mumbai at 1.30 am. He spent the day getting coffee at the Starbucks outlet in Vashi, greeting fans from his car, and visiting underprivileged children in Mumbai slums.

The singer flew to India from Dubai. Next stop on his Purpose Tour is Johannesburg, Africa.