Justin Bieber landed in Mumbai in Wednesday for his first concert in India. The Purpose concert is scheduled at DY Patil Stadium at 4 pm onwards Justin Bieber will perform at DY Patil's stadium in Mumbai

New Delhi: Pop singer Justin Bieber landed in Mumbai in Wednesday for his first concert in India. The Purpose concert is scheduled at DY Patil Stadium at 4 pm onwards. However, people flocked the stadium since morning. Justin Bieber will perform from 8 pm and his act is expected to go on for about 90 minutes. Ahead of the concert, Justin Bieber, who is staying at hotel in Mumbai's Lower Parel, visited a slum area, where he met some children. A fan club tweeted videos from the 23-year-old singer's meeting. Actor Salman Khan's bodyguard Shera has been given the responsibility of Justin Bieber's security in India. He is taking a tour of Mumbai in Rolls Royce vehicle.

Here are the videos:

Video of Justin Bieber spotted out in India today. (May 10) pic.twitter.com/D3QLHPYVjQ

(2) Another video of Justin Bieber spotted out in India today. (May 10) pic.twitter.com/Y9s0KWQQk6

Meanwhile, the gates of DY Patil's stadium opened at 2 pm for the Beliebers. A turnout of about 45,000 is expected at the concert. The venue is jam-packed and people wait in long queues to take over their seats. For about 350 special fans, a special JB Pit is created, who can watch him perform closely. 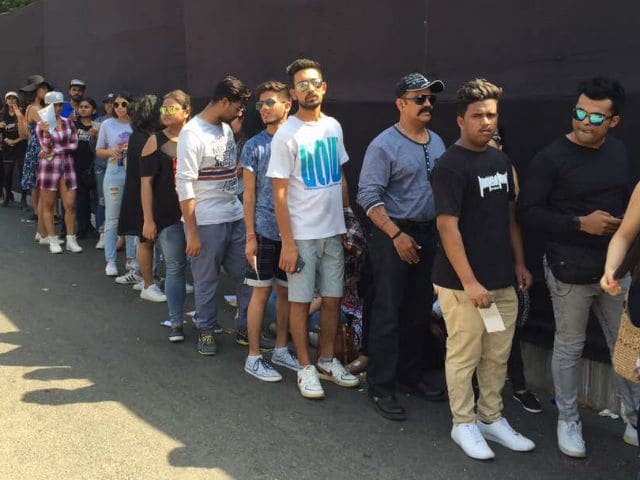 Beliebers queue outside the concert venue

Justin Bieber will arrive at the venue by a chopper. Few hours ago, a chopper was spotted, but without the singer.

Promoted
Listen to the latest songs, only on JioSaavn.com
The pop star will perform to his hit songs like Baby, Boyfriend, What Do You Mean?, Get Used to It, Company and No Pressure while Alan Walker, DJ Zaeden and Sartek are a part of the opening act.

Justin Beiber's last stop was Dubai, from where, he tweeted about his India gig. "Dubai is incredible. India you are next. Ready?," he captioned his post.