Justin Bieber's India Concert, Through The Lens Of Alia Bhatt

Alia Bhatt, who attended Justin Bieber's concert with her sister Shaheen, instagrammed a picture and wrote: "Bieber with bae-ber" 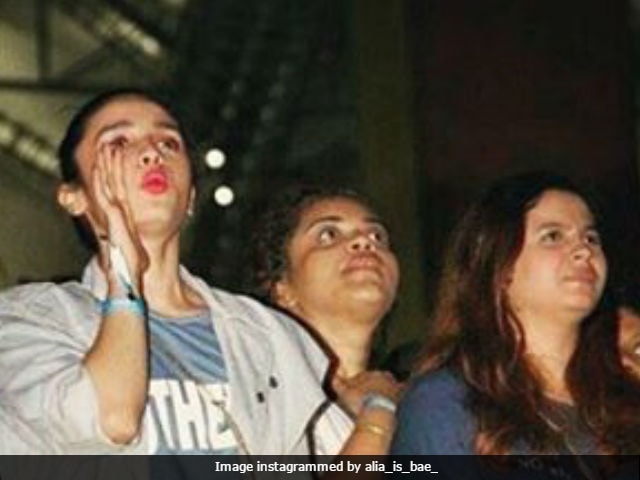 New Delhi: Sorry, Justin Bieber's India concert is now done. If you were at Mumbai's DY Patil stadium for the gig then you must have grooved to Let Me Love You, Baby and Mark My Words and loved Justin's guitar rendition of Dark Water. And so did Bollywood celebs like Alia Bhatt, Malaika Arora Khan, Sonali Bendre, Pooja Hegde and many more. Justin Bieber's concert pulled Bollywood elite to the Mumbai stadium, who later shared their absolutely favourite moments from last night's mega show. Actress Alia Bhatt attended the show with her sister Shaheen and she posted a picture with caption: "Bieber with bae-ber (sic)."

Alia Bhatt arrived at the concert wearing a denim jacket by Rheson, which is Rhea and Sonam Kapoor's joint fashion label. Take a look at Alia Bhatt's stylish entry.

Malaika Arora, who made a head-turning entry with her estranged husband Arbaaz Khan and son Arhaan, was spotted in actress Pooja Hedge's picture. Pooja shared a picture with Justin Bieber performing in background and wrote: "Crazy show with these crazy girls. #beiberfever #girlsjustwannahavefun"

Here are pictures of Malaika Arora arriving with Arbaaz and Ahaan; and Pooja Hedge at the entrance.

Meanwhile, Sonali Bendre was on 'Mom Duty.' The actress accompanied her son Ranveer to the concert and wrote: "Beibered out!!! #concert #growinguptoofast #momduties #purposetour (sic)."

Promoted
Listen to the latest songs, only on JioSaavn.com
Like Sonali, Sridevi, Raveena Tandon, Aishwaryaa R Dhanush and Arjun Rampal were among other celebs who arrived as the kids' concert dates.

"I Ran Away, Some (MLAs) Are Signing Under Pressure": Sena MLA Kailas Patil