Delhi Jal Board (DJB) Vice-Chairman Raghav Chadha, who reviewed the situation at the Wazirabad pond, said Haryana has not been releasing at least 120 MGD (million gallons per day) water that belongs to Delhi and this has led to a water crisis in the national capital. 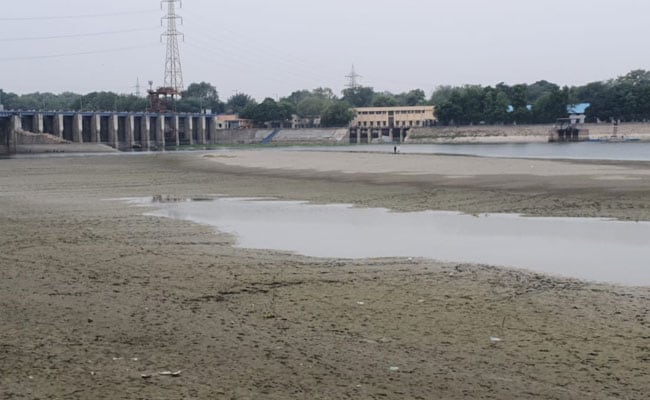 Even if water level in Yamuna goes down by a foot, it causes havoc in Delhi: Raghav Chadha

Delhi Jal Board (DJB) Vice-Chairman Raghav Chadha on Monday said the water levels of the Yamuna river at the Wazirabad barrage have hit the lowest point in 56 years as Haryana has withheld Delhi's legitimate share of water.

Mr Chadha, who reviewed the situation at the Wazirabad pond, said Haryana has not been releasing at least 120 MGD (million gallons per day) water that belongs to Delhi and this has led to a water crisis in the national capital.

"The water treatment plants in Delhi are operating at a reduced capacity because of a less discharge of raw water from Haryana.

"With Haryana withholding Delhi's share of water, the Yamuna has dried up...so much that it can be used as a cricket or a hockey field. The water levels at the Wazirabad barrage have not been so low since 1965," Mr Chadha said.

"Delhi is a landlocked city and relies on its neighbouring states for water supply. Uttar Pradesh supplies to us a share of the Ganga water, Haryana of the Yamuna water, we get some from Punjab through (the) Bhakra Nangal (dam). The biggest share of this is supposed to be supplied by Haryana," he added.

Even if the water level in the Yamuna goes down by a foot, it causes havoc in the capital, the Aam Aadmi Party (AAP) leader said, adding that it has gone down by 7.5 feet as Haryana has withheld Delhi's share of water and the BJP-led Haryana government must return to Delhi its rightful share of 120 MGD water.

"With folded hands, I plead with the Haryana government, please give the citizens of Delhi their rightful share of water. The Supreme Court had ordered you to supply this water on legal grounds. You have to supply it on humanitarian grounds as well," he added.

Mr Chadha said there has been sufficient rainfall in Haryana and the water levels in the state's rivers are higher than what they need.

The DJB moved the Supreme Court on Sunday seeking directions to Haryana to release the capital's legitimate share of water.

The DJB has been supplying 945 MGD of water to the city residents this summer against the demand of 1,150 MGD.

At present, Delhi is receiving 479 MGD water as against 609 MGD from Haryana. Besides, the city draws 90 MGD groundwater and receives 250 MGD water from the Upper Ganga Canal.

With Haryana withholding 120 MGD water, the Yamuna has completely dried up and the operational capacity at various treatment plants has reduced by 40 to 50 per cent, Mr Chadha said.

He said the Chandrawal Water Treatment Plant (WTP) has been operating at a 55-MGD capacity against the normal of 90 MGD.

Similarly, the Wazirabad WTP and the Okhla WTP have been operating at a 80-MGD and a 12-MGD capacity against their normal capacity of 135 MGD and 20 MGD respectively.

Water supply has been hit in central Delhi, south Delhi, west Delhi and the NDMC area where important institutions, including the Rashtrapati Bhavan, the Supreme Court, the prime minister's Residence and embassies, are located, Mr Chadha pointed out.