Haryana Chief Minister Manohar Lal Khattar said, "Haryana government will soon bring electric vehicle policy and subsidy will be given on electric vehicles from the beginning." 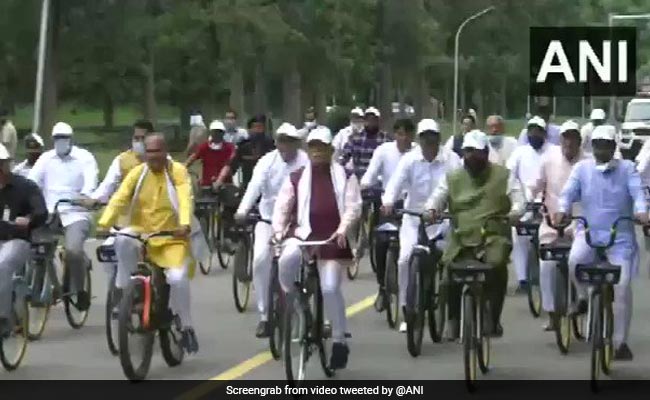 Haryana Chief Minister Manohar Lal Khattar on Wednesday rides a bicycle along with his cabinet colleagues and MLAs from his residence to the secretariat in Chandigarh to observe World car-free day.

'World Car-Free Day' being celebrated today, you should also step up by not using private vehicles for the protection of nature," Chief Minister Office said in a tweet.

#WATCH | Haryana Chief Minister Manohar Lal Khattar* rides a bicycle along with his cabinet colleagues and MLAs from his residence to the secretariat in Chandigarh to observe #Worldcarfreedaypic.twitter.com/ME0dt31MJl

On the occasion of World Car Free Day, the Chief Minister inaugurated an exhibition of electric vehicles at the Civil Secretariat premises.

The Department of Information, Public Relations and Languages had also put up a digital exhibition to create environmental awareness.

He further said that for the maintenance of trees older than 75 years, a pension amount of Rs 2,500 would be given per year to people in the name of the Pran Vayu Devta Pension Scheme.

"Such trees will be identified throughout the state and these will be looked after by involving local people in this scheme," he added.