This came to light through the analysis of the radio tracking devices fitted on a few vultures in Madhya Pradesh's Panna Tiger Reserve (PTR), an official said. 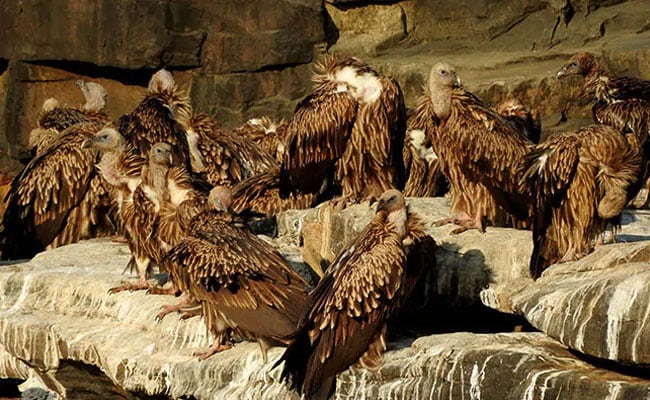 The radio devices were fitted on the vultures in November last year. (Representational)

An ongoing study of the behaviour pattern of the critically-endangered vultures has revealed that these large birds often fly around 150 kms in search of food on a daily basis, an official said on Thursday.

This came to light through the analysis of the radio tracking devices fitted on a few vultures in Madhya Pradesh's Panna Tiger Reserve (PTR), he said.

The radio devices were fitted on these birds in November last year with the aim of monitoring their activities, he said.

"It was found that many times, these three vultures would fly off to neighbouring state Uttar Pradesh from Panna in search of food and return home in the evening," Mr Sharma said.

Radio tracking devices would be fitted on some more vultures in the PTR soon, he said.

According to Sharma, the behaviour of these scavenger birds, their habits and movements had not been studied with the help of radio trackers in the past.

PTR is home to around 600 vultures of seven species -- four endemic and three migratory -- he said.

AK Jain, deputy director of Bhopal-based Van Vihar National Park, said that India has lost 99.7 per cent of the vulture population and the remaining of these birds also faced the threat of extinction two decades ago, following which steps were initiated for their conservation.

Madhya Pradesh is home to the highest number of 8,397 vultures among all the states in India, he said, adding that the last state wide census of these scavenger birds was conducted in 2019.

The first census of vultures in the state was held in 2016 and the third count would begin from February 7, he said.

Environment activist Sachin Jain said vultures play a crucial role in maintaining the ecosystem as they eat the carcasses of dead animals.

If these natural scavengers become extinct, dead animals would decay and breed germs and spread diseases, he said.

Mr Jain said that according to a famous journal report of 2010, India lost 4.9 crore vultures in 20 years.

"There were around five crore vultures in India some 20-25 years ago, but this number came down to around one lakh in 2007," he said.

He said that most of the vultures died from ingesting cattle carcasses that contained diclofenac, a drug used in treatment of livestock, following which it was banned in India.