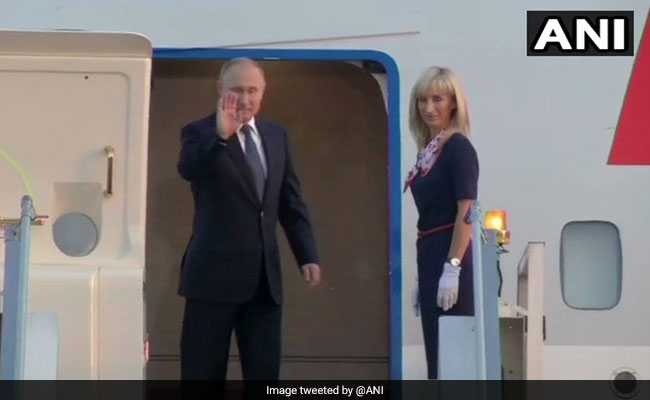 Russian President Vladimir Putin has left for Russia after  wrapping up a two-day visit to India. India and Russia  reportedly inked a $5 billion deal to procure Moscow's most advanced air defence system, the S-400 Triumf, risking US sanctions. Mr Putin arrived Thursday and was greeted by Foreign Minister Sushma Swaraj at the airport and welcomed by PM Modi at his residence.

India wants S-400 missile systems from Russia to change the strategic balance in the subcontinent. The long-range missile systems will tighten India's air-defence capabilities along the 4,000-km-long India-China border. The US could impose sanctions using the Countering America's Adversaries through Sanctions Act or CAATSA legislation, which deals primarily with countries having "significant transactions" with Russia, North Korea or Iran.

India is also planning on acquiring 4 Krivak-class frigates from Russia, two of which will be built in India, which will be a $2.5 billion deal.

Mr Putin and PM Modi are also set to discuss key regional and global issues, including US sanctions on import of Iranian crude oil. Along with the S-400 Triumf and Krivak deals, the bilateral summit will have the world leaders sign around 20 agreements.

Oct 05, 2018 17:44 (IST)
Interaction between young people of India and Russia, especially schoolchildren, would perhaps be the "most important addition" to the "unprecedented level" of bilateral ties and serve as a basis for a long-term cooperation, Russian President Vladimir Putin said.
Oct 05, 2018 17:24 (IST)
Vladimir Putin meets President Ram Nath Kovind 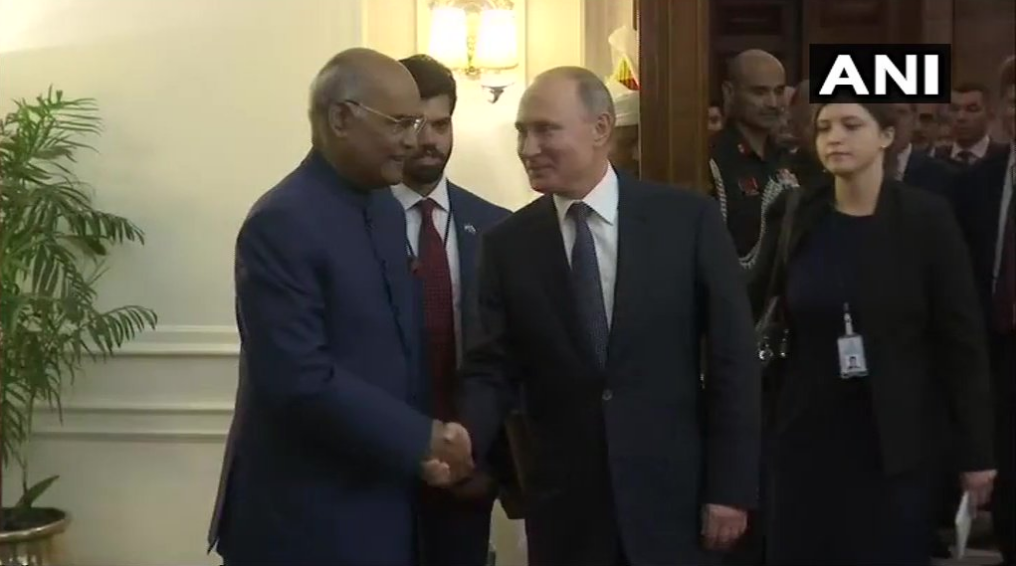 Oct 05, 2018 17:10 (IST)
Russia has also been invited to set up a dedicated defence industrial park in India by PM Modi. "We are committed to building a new India. We have to do this as early as possible," PM Modi said
Oct 05, 2018 16:56 (IST)
Key points from PM Modi's address
Energy, Digital Economy, Start up sectors are our focus areas
Our IT companies can explore opportunities in Russia
We see collaboration with Russia for developing nuclear energy
We are committed to shaping a new India and we want everyone to cooperate
In terms of ease of doing business, India has climbed 42 ranks across the world
All these changes happen when ground realities are acknowledged with a futuristic vision
Reform, Perform Transform is our Mantra to bring about changes in various sectors
Oct 05, 2018 16:36 (IST)
PM Modi speaks
India and Russia have been able to remain great friends over decades.
Ties between the two countries at a new high
Trade between the two countries has grown by 20%
To facilitate the entry of Russian firms into India, we have established 'Russia Plus'
Oct 05, 2018 16:31 (IST)
PM Modi begins address at the summit after Vladimir Putin 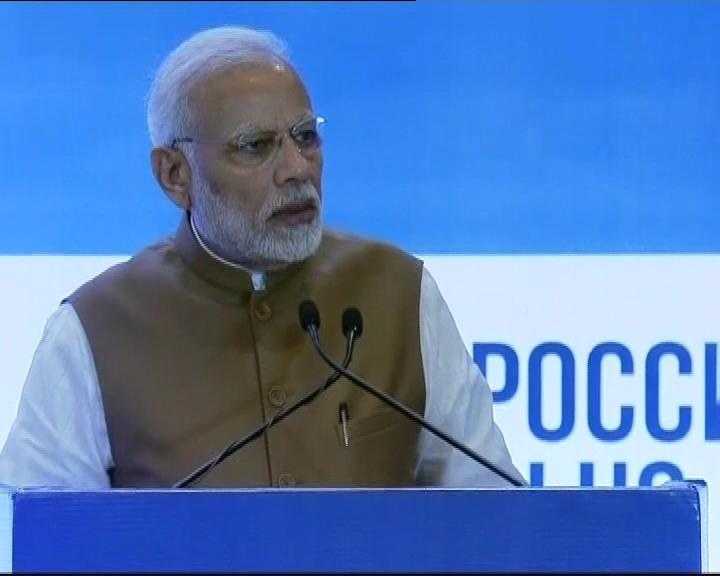 Oct 05, 2018 16:30 (IST)
Russia is considering building one more nuclear power plant. As we collaborate with India, we will further strengthen our cooperation in this regard.
We also want to boost India's business prospects with Russia. We are now trying to reach new heights when it comes to developments, growth. We also see situation is improving in the labour market, Mr Putin said
Oct 05, 2018 16:26 (IST)
Vladimir Putin addresses the India-Russia business summit 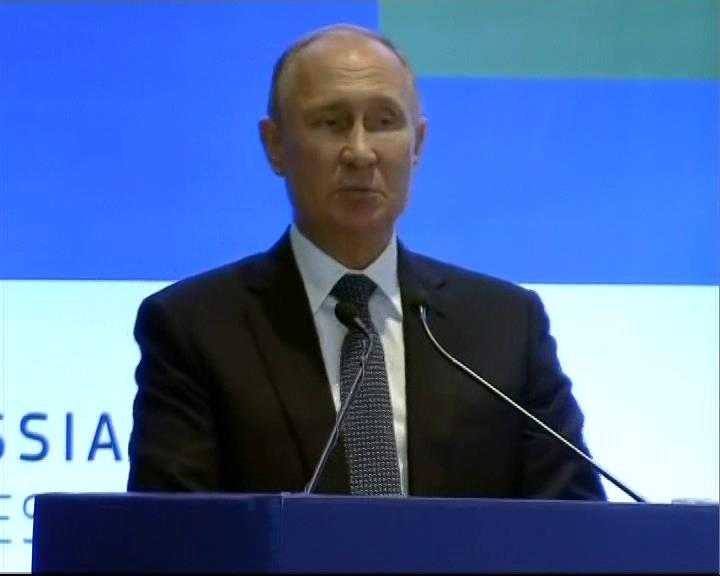 Oct 05, 2018 15:52 (IST)
Vladimir Putin also answered certain questions while interacting with students. To a question on which scientist impacted him the most, he replied, "Hard to say which scientist, book, impresses me the most. I can list all scientists starting with Plato. They have all contributed significantly. They have made unique contribution to the human kind. I value people who devote their life to science".
Oct 05, 2018 15:32 (IST)
Prime Minister Narendra Modi and Vladimir Putin with school students in Delhi 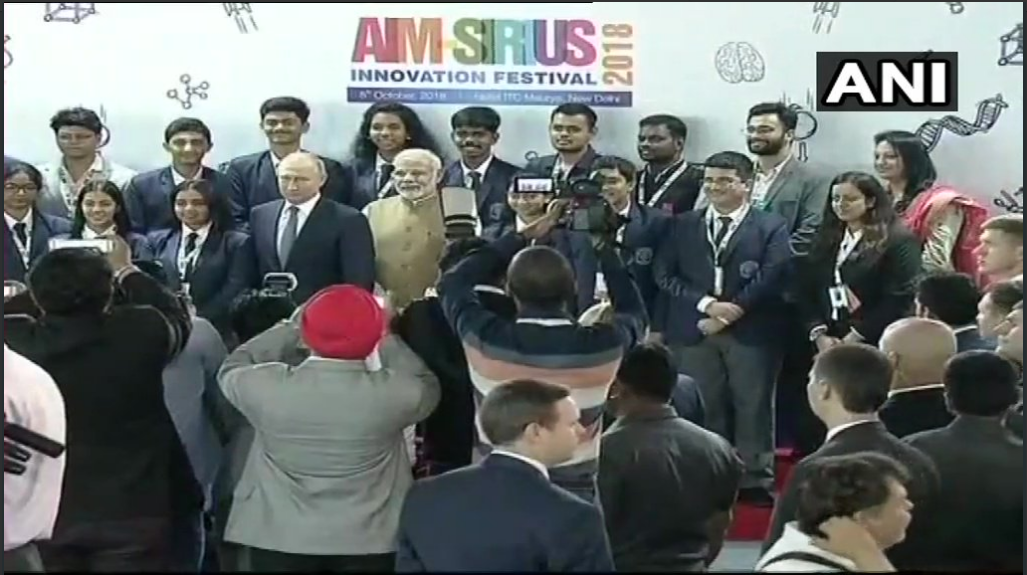 Spectrum of cooperation just got wider!

8 documents exchanged in the presence of PM @narendramodi and @KremlinRussia_E President Putin. Full list of documents at https://t.co/xNLF23upDf#DruzbaDostipic.twitter.com/eFDQ3qnkie

Oct 05, 2018 15:04 (IST)
"Russia values its ties with India, relationship with India is a top priority": Vladimir Putin
India and Russia have had a strong and reliable relationship. Ties between the two countries are growing at a rapid pace. We enjoy a relationship of mutual respect.
Defence ties between the two countries have grown, but so has business. Indian firms, especially in the oil and gas sector are welcome in Russia. India has massive energy demands and Russia is resource-rich. We invite oil companies to come and set up operations in Russia.

Our trade ties have grown 20 per cent year on year.

We also believe in the peaceful use of nuclear energy. Apart from Kudankulam, Russia will build over 12 reactors in India over the next 20 years.

India is also a big favourite among Russian tourists. People-to-people ties have also grown rapidly, as have ties in the education and research field. 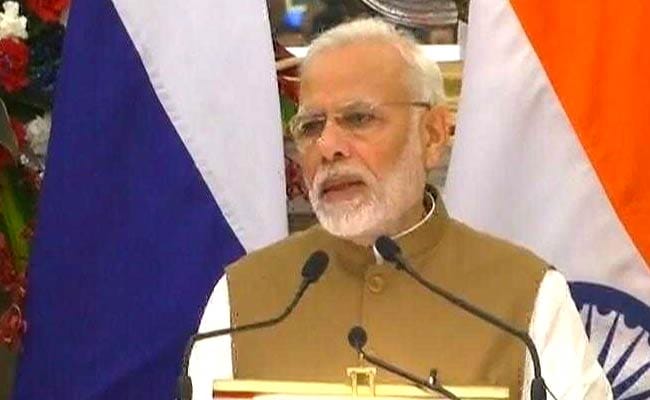 Read Here: India Signs Deal For Russia S-400 Missile System Amid US Threat - 10 Facts
India will finally acquire the S-400 Triumf, the world's most lethal surface-to-air missile, from Russia amid a threat of tough sanctions from the US. The deal was signed between Prime Minister Narendra Modi and Russian President Vladimir Putin this afternoon, people with direct knowledge of the matter said. The official announcement is expected later in the day. The bilateral talks between the two leaders are going on. Mr Putin is India on a two-day visit; he arrived in the national capital on Thursday. The US has hinted at tough sanctions against any nation that buys advanced military hardware from Russia. Russia has been an important supplier of defence hardware to India for decades.
Oct 05, 2018 13:57 (IST)

Oct 05, 2018 13:36 (IST)
President Vladimir Putin sought Friday to nail down billions of dollars worth of arms deals with India, as New Delhi walks a tightrope between Moscow and Washington with a wary eye on China, according to news agency AFP.

Putin and Prime Minister Narendra Modi hugged as they went into talks in the Indian capital, underling the apparent warm rapport that the two strongmen leaders have built up in recent years.

A relationship radiating warmth and affection!

Looking forward to our deliberations, which will further enhance India-Russia friendship. @KremlinRussia_Epic.twitter.com/IlGwRrXgAK

India Risks US Sanctions With Purchase Of $5 Billion Russian Missiles
India is set to sign a multi-billion dollar defence deal with Russia that could invite sanctions from the United States. Kremlin has announced that the deal for the S-400 Triumf surface-to-air missile system would be signed when Russian President Vladimir Putin meets Prime Minister Narendra Modi in Delhi on Friday.
"As and when the government approves it, delivery will be in 24 months," Air Chief Marshal BS Dhanoa told reporters.
Oct 05, 2018 10:19 (IST)

Read Here: Russian S-400 Missile That India Wants Focus Area Of Sanctions, Says US
The US administration is required under a domestic law, Countering America's Adversaries through Sanctions Act or CAATSA to impose sanctions on any country that has "significant transactions" with Iran, North Korea or Russia.

"We urge all of our allies and partners to forgo transactions with Russia that would trigger sanctions under CAATSA," a State Department Spokesperson said on Wednesday when asked about India's plan to purchase multi-billion S-400 missile defense system from Russia.
Oct 05, 2018 09:50 (IST)

Read Here: Russian S-400 Triumf Missile System: 10 Things To Know
The Russian S-400 Triumf air defence missile system that India is looking to add to its arsenal has an operational range of over 400 km, and is considered one of the deadliest surface-to-air missiles or SAM in the world. Russian President Vladimir Putin, during his two-day India visit, and Prime Minister Narendra Modi are expected to sign the deal for India's acquisition of the S-400 missile system.
Oct 05, 2018 09:48 (IST)
Vladimir Putin's schedule for today
1100 hrs
Meeting with Prime Minister of India
Venue: Hyderabad House
Photo Op: AV Media

1630 hrs
Meeting with the President
Venue: Rashtrapati Bhawan
Photo Op: Agencies Only
Oct 05, 2018 09:26 (IST)
Russia building its second nuclear power plant in India is on the table too: news agency AFP
President Vladimir Putin was expected Friday to sign a deal in India worth more than $5 billion for the S-400 air defence system, despite US warnings of sanctions against countries buying Russian military hardware, reported news agency AFP.

Putin, who arrived in New Delhi late Thursday, is set to discuss with Prime Minister Narendra Modi further agreements worth some $3 billion for Russian naval ships and military helicopters.

Russia building its second nuclear power plant in India is on the table too, as is the training of Indian astronauts in Russia for New Delhi's first crewed space mission in 2022, reported AFP.
Oct 05, 2018 09:25 (IST)
S-400 Triumf Missile Deal: "Will maintain sovereignty in all earnestness": Nirmala Sitharaman
"India has maintained its sovereignty as regards to its relationship with countries. We shall maintain it in all earnestness," Defence Minister Nirmala Sitharaman had said when asked whether the US sanctions will hit India's defence ties with Russia.
Oct 05, 2018 09:10 (IST)
India-Russia Bilateral Summit
Russia is one of only two countries with which India holds annual bilateral summits, the other being Japan.
Oct 05, 2018 08:44 (IST)
India-Russia Bilateral Summit: Third So Far, After Informal Sochi Summit
This is the third meeting between PM Modi and Vladimir Putin this year after the informal meeting in the Russian resort city of Sochi in May and a bilateral on the sidelines of the BRICS Summit in South Africa.
Oct 05, 2018 08:43 (IST)
S-400 Missile Deal: "As And When The Government Approves it": Air Force Chief On S-400 Triumf Missile Deal
There have been indications by New Delhi that it will go ahead with the S-400 deal notwithstanding the US sanctions. "As and when the government approves it, delivery (of the missiles) will be in 24 months," Air Chief Marshal BS Dhanoa has told reporters.
Oct 05, 2018 08:42 (IST)
Vladimir Putin is accompanied by Deputy PM, Foreign Minister
The Russian president is accompanied by a high-level delegation comprising Deputy Prime Minister Yuri Borisov, Foreign Minister Sergey Lavrov and Trade and Industry Minister Denis Manturov.
Oct 05, 2018 08:30 (IST)
Russian Missile Shield A Gamechanger For India?

Read Here: Big Ticket Defence Deals Lined Up For PM Narendra Modi And Vladimir Putin Meet Today: 10 Points
Russian President Vladimir Putin, who arrived in Delhi on Thursday, will get down to business with Prime Minister Narendra Modi today in a bilateral meeting that is expected to end with the signing of a number of big defence deals. One of the highlights of Mr Putin's visit is India's interest in buying the S-400 air defence missile system worth $5 billion, amid threat by the US of tough sanctions.
Narendra ModiVladimir Putin In IndiaS-400 Triumf Air Defence Missile