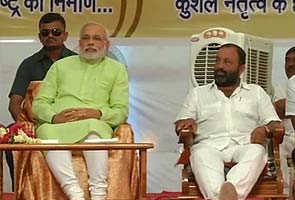 Vadodara: The canny Narendra Modi would have done a detailed SWOT analysis on this one. Vitthal Radadiya, famously known as the "gun-toting MP", has joined Mr Modi's party, the BJP today. He quit the Congress in a huff last month.

On stage in Dhoraji, Mr Radadiya looks familiar. He is dressed in the same white that he wore when he appeared on national television in CCTV footage last year when he was a Congress MP, walking about angrily at a toll booth, muttering and brandishing a big gun, which he then pointed at an astonished toll attendant. Seated next to him today is Mr Modi in a contrasting lime green kurta. Both unsmiling.

For the extremely image-conscious Gujarat Chief Minister, clearly political math won. Mr Radadiya is an influential Leuva Patel leader from the Saurashtra region in Gujarat and is expected to bring along hundreds of supporters to the BJP, among them his son Jayesh, an MLA. With Lok Sabha elections due next year, that advantage is difficult to ignore.

At the function, Mr Radadiya said he was discriminated against by the Congress and was forced to quit the party.

In the Assembly elections held in December last, Vitthal Radadiya was one of the few Congressmen who stood their ground and won in the face of the Modi tidal wave, as the Gujarat CM got himself a fourth straight term in office.

The 55-year-old Mr Radadiya had quit his Lok Sabha seat to be an MLA and reportedly expected to be rewarded by the party with the position of Congress Legislature Party or CLP leader. But the Congress chose to go with old warhorse Shankarsinh Vaghela.

Peeved, he resigned and offered himself to the BJP, lustily cheering, "Narendra Modi for PM."

Mr Modi said that the Mr Radadiya, along with son Jayesh, will strengthen the BJP in the state.

Promoted
Listen to the latest songs, only on JioSaavn.com
The Congress has sought to remind the BJP that not long ago, it had called Mr Radadiya "a gangster." "Now he is their darling...I feel like laughing at the BJP," said central minister Rajiv Shukla. Jai Narayan Vyas, of the Gujarat BJP says it is merely a home-coming for Mr Radadiya, who was in the party once upon a time.

Mr Vyas is however hard put to explain how the BJP has inducted someone with more than dozen criminal cases against him, including the Vadodara toll both case. Mr Radadiya had refused to apologise after the incident, saying he acted in self-defence, though no other person could be seen anywhere near him on camera for most part of the footage. The attendant said the politician was angry because he asked him to prove he was an MP and so didn't have to pay toll.