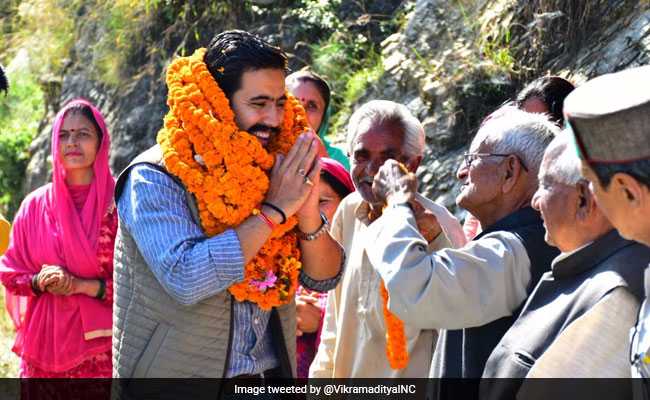 New Delhi: Himachal Pradesh Chief Minister Virbhadra Singh's son was named the Congress nominee from Shimla Rural today as the party announced the names of its candidates for the remaining nine seats, just a day before the filing of nomination comes to an end.

The Congress had initially dithered over announcing the candidatures of Vikramaditya Singh and Champa Thakur, but gave in to pressure at the last minute, party sources said.

According to the party sources, the Congress was sticking to its "one family, one ticket" formula, whereby only one member of a family would be made a party candidate, seriously and this was the reason for the delay in declaring the candidates for Shimla Rural and Mandi seats.

Earlier in the day, the party released its second list of seven candidates, withholding the names of its nominees for just two seats -- Shimla Rural and Mandi.

About an hour later, the party, however, cleared the nominations of Vikramaditya Singh and Champa Thakur.

Virbhadra Singh had earlier publicly declared that his son would contest from his seat. The chief minister has moved to the Arki Assembly seat in Solan district and the party has declared his candidature from there.

Tomorrow is the last day for filing of nominations for the election to the 68-member Assembly. The Congress had on October 18 announced its first list of 59 candidates.

Hari Chand Sharma has been declared as the party candidate from Manali, while Surinder Thakur will be the Congress nominee from Kullu.

The Congress fielded Vivek Sharma from Kutlehar, while Lakhwinder Rana has been fielded from Nalagarh.

In addition, the party replaced its candidate from Anni.

Paras Ram will contest from the seat in place of Bansi Lal, whose name was declared in the first list.