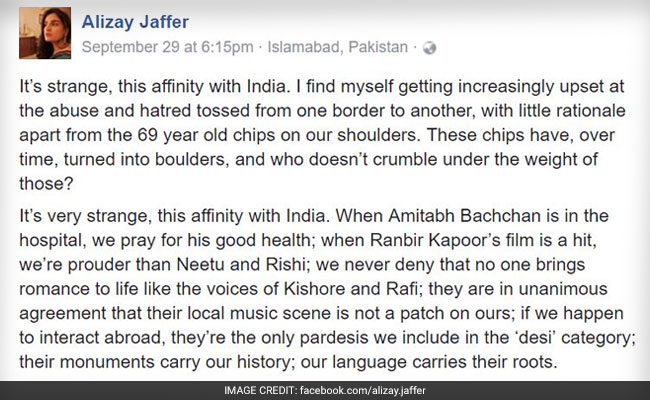 She says India and Pakistan are carrying the burden of decisions made in the past.

"It's strange, this affinity with India," says Islamabad-based Alizay Jaffer on Facebook. Her long post, describing the relationship between the people of India and Pakistan has now gone viral with about 7,000 reactions and over 2,700 shares on the social networking site since September 29.

Ms Jaffer wrote her post the day the Indian Army announced it had conducted surgical strikes against terrorists launch pads across the Line of Control. She talks of India and Pakistan "sometimes as siblings at loggerheads and other times as a divorced couple," saying they carry the burden of decisions made in the past.

"The 69-year-old chips on our shoulders...these chips have, over time, turned into boulders, and who doesn't crumble under the weight of those?" she writes.

She also writes about Bollywood. "When Amitabh Bachchan is in the hospital, we pray for his good health; when Ranbir Kapoor's film is a hit, we're prouder than Neetu and Rishi; we never deny that no one brings romance to life like the voices of Kishore and Rafi," and adds, "their monuments carry our history; our language carries their roots."

Yes, she writes about the wars, and Uri and Balochistan and Kargil. "It seems the scars of our separation are still so ripe, so painful, that they can't accept that we left, and we can't accept that they let us leave. In an event like this, we only find solace in making sure the other is just as hurt as we are, so we put in our all our resources, our best efforts, to do exactly that," she says.

Both people are so alike, Ms Jaffer emphasises and talks of how much there is to gain from working together. "What's strange is our prolonged blindness to the immense opportunities that lie before us as a unit, and the vast desolation that lies before us as enemies," she writes, signing off with a message of love, "you know I will always love you."

Promoted
Listen to the latest songs, only on JioSaavn.com
There are bitter comments on her post, angry ones and also wistful ones. Some praise her optimism, others say it is misplaced.