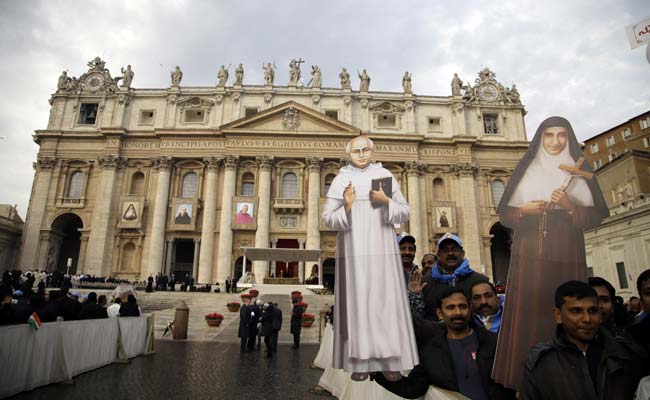 Kottayam: In a ceremony watched closely by thousands in Kerala, a Catholic priest and a nun from the state - Father Kuriakose Chavara and Sister Euphrasia - were conferred sainthood by Pope Francis at Vatican's St Peter's Square on Sunday.

The ceremony included a Latin hymn and a recommendation by a representative of the Congregation for the Saints, after which Pope Francis pronounced them saints at a special mass. Representatives of the new saints handed over portions of the holy remains to be kept there as part of the canonisation ritual.

"They responded with extraordinary creativity to the commandment of love of God and neighbour," Reuters quoted the Pope as saying. "Their preference for the smallest and poorest was the reflection and measure of their unconditional love of God."

In Kerala, prayers were offered and masses held since morning. Arrangements were made for special masses at multiple points in Kottayam and Thrissur, where the homes churches of Father Chavara and Sister Euphrasia are located. As Pope Francis pronounced the names of the saints in faraway Rome, people burst into applause.

Colorful processions were seen throughout the day, as all made their way to the church centres.

With today's canonisation, the centuries-old Syro Malabar Church now has three Saints, the first being Sister Alphonsa, who was declared a saint in 2008.

Father Chavara, who was ordained as a priest in 1829, is associated with reforms within the Syro-Malabar Catholic Church. His pioneering contribution was setting up schools along with churches.

He also set up the first printing press among the Syro-Malabar churches in Kottayam, which went on to publish the first Malayalam daily and popularised the concept of Sunday sermons. He founded the first Indian congregation for men and the congregation Carmalites of Mary Immaculate for the pursuit of spiritual activities.

He died in 1871 and is buried at Saint Philomina's Church at Koonammavu in Ernakulam district. He was beatified in 1986 along with Sister Alphonsa, after claims of several miracles by his followers.

Promoted
Listen to the latest songs, only on JioSaavn.com
Sister Euphrasia, who led a more secluded life devoted to prayers, was beatified in 2006. She was known as a 'praying mother' and a 'saint among nuns', who, according to followers, had several miracles to her credit.