"They Urinated In My Mouth," Says UP Journalist Beaten By Railway Cops

Journalist Amit Sharma said a group of Railway Police personnel locked him up and abused him last night when he was covering the derailment of a train in Shamli district.

A journalist is punched, slapped and abused by a group of policemen as he pleads with them to stop, in a video that has emerged from western Uttar Pradesh at a time the state is in the national glare over the arrest of journalists on charges of "defaming" Chief Minister Yogi Adityanath.

The journalist said a group of Railway Police personnel locked him up and abused him last night when he was covering the derailment of a train in Shamli district.

"They were in plain clothes. One hit my camera and it fell down. When I picked it up, they hit and abused me. I was locked up, stripped and they urinated in my mouth," Amit Sharma, a stringer for TV channel News24, said.

#WATCH Shamli: GRP personnel thrash a journalist who was covering the goods train derailment near Dhimanpura tonight. He says, "They were in plain clothes. One hit my camera&it fell down. When I picked it up they hit&abused me. I was locked up, stripped&they urinated in my mouth" pic.twitter.com/nS4hiyFF1G

Government Railway Police personnel who were present at the spot, abused, kicked and beat up Amit. They also allegedly snatched his camera and phone while he was shooting from the spot of the derailment.

In one of the videos, Mr Sharma was seen behind bars in the police station and narrating what happened to him to his colleagues. "10 to 15 days ago, I had done a story on them. The mobile phone that they snatched from me had the footage of the story," he said after he was released. 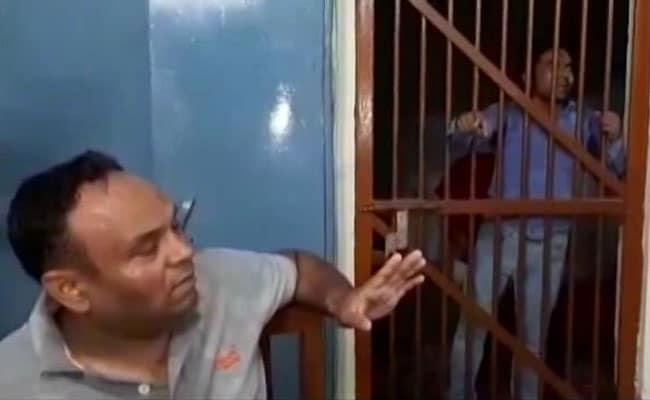 Journalist Amit Sharma was locked up in the police station in Uttar Pradesh's Shamli for the night.

The UP Police, which oversees the Government Railway Police, took note of the video and said the railway police Station House Officer and a constable have been suspended.

"We have come across a video where a journalist has been beaten up & put up in a lock up. DGP UP OP Singh has ordered for immediate suspension of SHO GRP Shamli Rakesh Kumar & Const. Sanjay Pawar," the Uttar Pradesh police tweeted.

The incident has been held up by many on social media as another example of journalists being targeted in Uttar Pradesh.

On Tuesday, the Supreme Court ordered the state to release a journalist who had been jailed over a tweet that had "objectionable comments" on Yogi Adityanath.