Yogi Adityanath was the face of the BJP's campaign for the Gorakhpur and Phulpur by-elections, calling in no star campaigners from the centre. Samajwadi Party and Bahujan Samaj Party pooled resources to take on the BJP in Gorakhpur.

Gorakhpur: The BJP received a massive setback as votes were counted in crucial by-elections on Wednesday, with the Samajwadi Party winning both Gorakhpur and Phulpur, parliament seats vacated last year by Chief Minister Yogi Adityanath and his deputy Keshav Prasad Maurya as they joined the state government after the BJP's landslide win in the assembly elections. For arch rivals, Samajwadi Party and Mayawati's Bahujan Samaj Party, a tentative political experiment has brought big returns.

The chief minister was the face of the BJP's campaign for the by-elections to the two VVIP seats, holding multiple rallies and calling in no star campaigners from the centre. Ahead of polling, he described the by-elections as a dress rehearsal for the general election next year, telling NDTV, "Our victory margins will be as big as in 2014."

The Samajwadi Party's candidate Praveen Kumar Nishad defeated BJP's Upendra Dutt Shukla by over 21,000 votes in Gorakhpur. In Phulpur the Samajwadi Party took an early lead and held on to it.

As trends began to turn the way of the Samajwadi Party in Gorakhpur, a top official scripted a major political controversy by banning the media from the area where votes were being counted. In a move not seen before, the media was kept 15 feet away from the area, which was blocked by curtains. It was removed after protests by lawmakers in Parliament and also the UP assembly.

The BJP's UP leaders have said they were taken by surprise. "Gorakhpur has always been a stronghold. Where we went wrong and how we can counter the SP, BSP combine, we will figure it out," Keshav Prasad Maurya said. 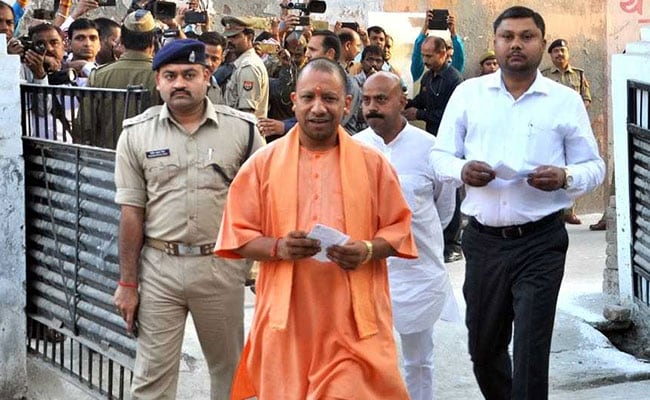 Yogi Adityanath held the Gorakhpur seat for 19 years as a BJP lawmaker.

"It is obviously not a satisfactory result. But one thing is certain that the SP was about to lose and the BSP's support helped it. We have to adapt our strategy now," UP Health Minister Sidharth Nath Singh said.

Steamrolled by the BJP in last year's assembly elections, Samajwadi chief Akhilesh Yadav and Mayawati had entered an unusual arrangement. The BSP, which did not field candidates in Gorakhpur and Phulpur, supported the Samajwadi candidates, with Mayawati deploying her workers to seek votes for them. In return the Samajwadi Party will support the BSP in Rajya Sabha elections in UP later this month.

Mayawati is yet to even call it an alliance, but the Samajwadi Party's Dharmendra Yadav said on Wednesday afternoon, "We hope this alliance will continue in 2019 and I will be requesting the leadership to continue this alliance. I also thank the SP workers and BSP leadership for this alliance."

It was seen as a trial balloon to test a partnership that can defeat the BJP in the 2019 national election when Prime Minister Narendra Modi will seek a second term. Crucial to a BJP win will be a repeat of its performance in 2014 Lok Sabha elections, when the party had, along with allies, won 73 of the UP's 80 seats. The Samajwadi Party had won five, the BSP none.

Promoted
Listen to the latest songs, only on JioSaavn.com
In assembly elections last year, the BJP won 325 of UP's 404 seats, with Akhilesh Yadav's party winning only 47 and the BSP, 19. The Congress had won seven.

Both Akhilesh Yadav and Mayawati sent senior representatives for a dinner party hosted by the Congress' Sonia Gandhi on Tuesday night, seen as attempt to consolidate opposition unity ahead of the 2019 elections.