Rahat Indori: The poet had been admitted to the hospital on Tuesday morning after he tested positive for coronavirus. 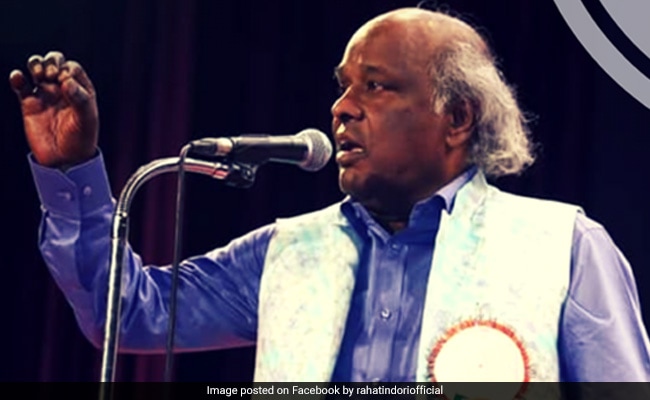 Famous Urdu poet Rahat Indori, whose powerful and lucid poetry filled halls and connected with the young and old alike, died of a heart attack at a hospital in Madhya Pradesh's Indore on Tuesday while being treated for COVID-19, his son said. He was 70.

The teacher-turned-poet had been admitted to hospital on Tuesday morning after he tested positive for the disease. He is survived by three sons and a daughter.

"He was admitted for coronavirus treatment but died after suffering a heart attack," son Satlaj Indori, also a poet, told PTI.

In the morning, the lyricist-poet tweeted about his COVID-19 diagnosis and said he will keep everyone updated through social media.

"After initial symptoms of COVID-19, my corona test was done yesterday which came out positive. Pray that I defeat this disease as soon as possible," Rahat Indori said in what would be his last post.

With a 50-year career in poetry, Rahat Indori, an Urdu scholar of great repute, was one of the biggest mushaira (poetry symposiums) stars in the country and someone who fearlessly called a spade a spade.

The wordsmith that he was, Rahat Indori translated the mood of the nation in his poetry that was emotive, direct and political.

Rahat Indori was that rare poet who was easily connected with the young generation.

In fact, his lines, delivered in a trademark expressive style, almost teasing as it were, were very popular with Tik-Tok users and those who did not even care or understand Urdu poetry.

Earlier this year, his poem "Bulati hai magar jane ka nahi" went viral on social media, making him a sensation among the youth.

Congress leader Rahul Gandhi bid farewell to Indori Sahab with a couplet -- "Ab na main hoon na baaki zamane mere. Fir bhi Shehron me mashhoor hain fasane mere" (Neither me nor my era exists, but my stories are still famous in the cities).

Historian and author Rana Safvi termed his death a "huge huge loss to a fearless voice and to the world of poetry".

But his stint in cinema was brief and limited to a few films. Lyricist Swanand Kirkire, also from Indore like Indori, said he was "disappointed" in films.

"He was a giant for me. He was a great Urdu scholar. He was a fearless voice of our times. He said whatever he wanted to say fearlessly, always. If you have to compare a western rockstar to anyone that would be Rahat saab. People used to sit till 3 in the morning to listen to him in mushairas. If he read his poem a bit early, the halls would empty out," Mr Kirkire told PTI, calling his death a huge loss to Indian literature.

In fellow poet Gulzar's view, Indori was the soul of a mushaira. " ''Mushaira loot ke le gaye'' is a saying in Urdu. Toh Rahat saab mushairon ke lootere the (he stole the thunder at symposiums)," Gulzar told PTI.

"Like Habib Jalib, he was from the fast disappearing tribe of poets who are never short of courage to call a spade a spade," Akhtar said.

Lyricist Varun Grover called him a "rockstar of the Indian literary world" and prince of the "mushaira" tradition.

"Rahat saab was a true legend... No other poet could fill stadiums and make a direct relationship with each and every listener in the packed arena like he did," Mr Grover told PTI. He said Rahat Indori would be the "showstopper" in mushairas.

"His range, sharp political commentary, and love for language combined with his impeccable craft inspired generations of Hindustani poets in India and will continue to do so," Grover added.

Rahat Indori did his schooling from Nutan School in Indore and his graduation from Islamia Karimia College Indore.

While teaching Urdu literature at IK College, he also became busy with ''mushairas'' and started receiving invitations from all over India and abroad.