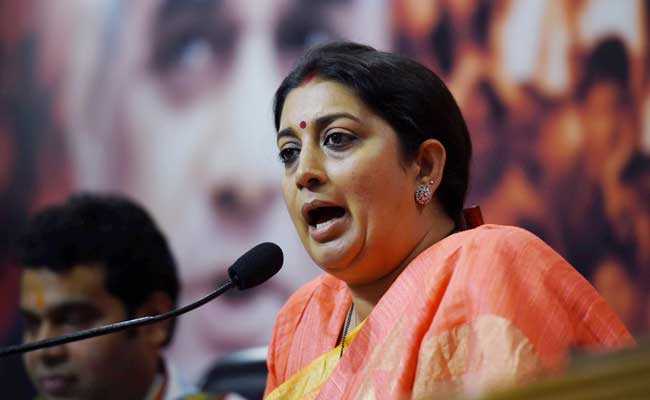 Union minister Smriti Irani posted a series of tweets today about a report carried in a business daily.

New Delhi: Union minister Smriti Irani's public argument with a journalist kept Twitter agog today. The exchange that started over a news report meandered to "freedom of speech" and even newspaper preferences as more and more joined the debate.

The report in the Economic Times newspaper alleged that the minister had recommended over 5,000 admissions in the central government-run Kendriya Vidyalaya schools in the current academic year - more than four times that of her predecessors.

@anubhutivishnoi I recognise ur source based agenda n have made public my contempt for it.

@anubhutivishn All admissions r recorded as per requests frm MPs across parties+Bpl families. Ur source based lie as usual ignores facts.

The reporter, Anubhuti Vishnoi, responded, saying that with utmost respect to the minister, she had been requesting for the ministry's comments since Friday, but none had come.

As the reporter pointed out:

@smritiirani Ma'am we would publish all that the ministry would say regardless of no of lines. We didn't get anything after several requests

@anubhutivishnoi it is bcoz of journalists like u dat a reader like me has stopped subscribing to ET.

Several more tweets joined the fiery debate. In response to a comment from another journalist, the minister shot back:

@RajatAroraET Sir it seems I have lost my right n freedom to express myself. Should my freedom of speech be subject to ur prior approval?

A couple of posts from the onlookers said:

.@smritiirani as HRD minister, your most important job should be to tweet full words. Our students look up to you(ish) @anubhutivishnoi

This is how you should do everything in the government. Give coal blocks, jobs and everything else recommendation too. @smritiirani@Joydas