The winners each received a certificate, a medallion bearing the likeness of the late president and a cash prize. 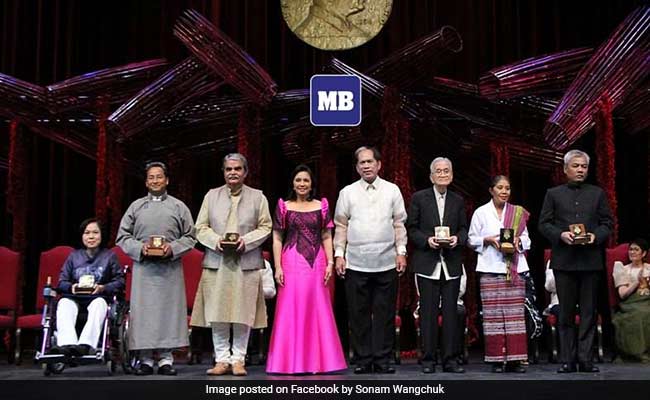 Bharat Vatwani and Sonam Wangchuk (second and third from left) are among the six who received the award.

Two Indians - one a psychiatrist who works for the mentally-ill people and another whose initiative to harness science and culture creatively for economic progress improved the lives of Ladakhi youth - on Friday received this year's Ramon Magsaysay Award.

Bharat Vatwani and Sonam Wangchuk are among six individuals who received the award, regarded as the Asian version of the Nobel Prize.

Mr Vatwani was recognised for "his tremendous courage and healing compassion in embracing India's mentally-afflicted destitute, and his steadfast and magnanimous dedication to the work of restoring and affirming the human dignity of even the most ostracized," the Ramon Magsaysay Award Foundation said in its citation for the winner.

Mr Vatwani, who is based in Mumbai, and his wife started an informal operation of bringing mentally-ill people living in streets to their private clinic for treatment, leading them to establish Shraddha Rehabilitation Foundation in 1988, aimed at rescuing mentally-ill persons living on the streets; providing free shelter, food, and psychiatric treatment; and reuniting them with their families.

Mr Wangchuk, 51, was recognised for "his uniquely systematic, collaborative and community-driven reform of learning systems in remote northern India, thus improving the life opportunities of Ladakhi youth, and his constructive engagement of all sectors in local society to harness science and culture creatively for economic progress, thus setting an example for minority peoples in the world," the citation said.

Mr Wangchuk was a 19-year-old engineering student at the National Institute of Technology in Srinagar when he went into tutoring to finance his schooling and help woefully unprepared students pass the national college matriculation exams.

In 1988, after earning his engineering degree, Mr Wangchuk founded Students' Education and Cultural Movement of Ladakh (SECMOL) and started coaching Ladakhi students, 95 per cent of whom used to fail the government exams.

In 1994, with Mr Wangchuk in the lead, 'Operation New Hope' (ONH) was launched to expand and consolidate the partnership-driven educational reform programme.

Youk Chhang from Cambodia, Maria de Lourdes Martins Cruz from East Timor, Howard Dee from the Philippines and Vo Thi Hoang Yen from Vietnam are the other winners of the award.

Established in 1957, the Ramon Magsaysay Award is Asia's highest honour. It celebrates the memory and leadership example of the third Philippine president after whom the award is named, and is given every year to individuals or organisations in Asia who manifest the same selfless service and transformative influence that ruled the life of the late and beloved Filipino leader.

The winners each received a certificate, a medallion bearing the likeness of the late president and a cash prize.