Tulsi Gabbard, a member of the Democratic Party of the United States clarified that she won't be able to present at the event due to prior commitments related to her scheduled presidential campaigns. 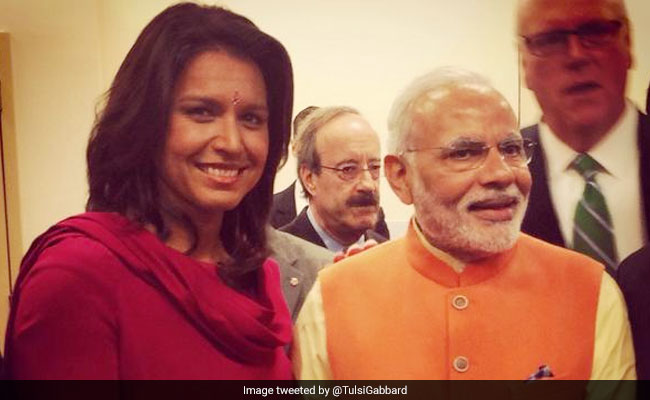 Tulsi Gabbard said, in a tweet, that she hopes to meet PM Modi during his US visit. (File photo)

Tulsi Gabbard, the first Indian-origin woman candidate for US presidential elections, has extended a warm welcome to Prime Minister Narendra Modi on his visit to US while also apologised for not being able to join the "Howdy Modi" event scheduled to be held in Houston on September 22.

Ms Gabbard, a member of the Democratic Party of the United States clarified that she won't be able to present at the event due to prior commitments related to her scheduled presidential campaigns.

"Namaste! I would like to extend a warm welcome to Prime Minister Modi on his latest visit to the US and I am sorry that I will not be able to join there in person due to previously scheduled presidential campaign events. I am really glad to see so many Indian Americans from all across our country as well as colleagues from Congress coming together there," she said in a video message.

Terming India as US' one of the most important partners in the Asia-Pacific region, she said, "India is the world's largest democracy and one of the most important partners of US in the Asia-Pacific region. Our two nations must continue to work closely together if we are to address the pressing issues that impact us and the world, issues like combating climate change. preventing nuclear war and nuclear proliferation and improving the economic well being of our people."

Invoking the age-old principle of "Vasudhaiv Kutumbkam", Ms Gabbard said, "So as we build a strong and lasting partnership between our two nations focusing on areas of growth, wealth and opportunity and equality, science, health, environment, security and counter-terrorism...we can bring about the idea of "Vasudhaiv Kutumbkam" recognising that everyone on our planet..we are all one family. There is no place for hate, bigotry, ignorance and prejudice."

Earlier in a tweet, Ms Gabbard had informed that though she will not be able to attend the event but hopes to meet Prime Minister Modi during his US visit.

Referring to an article, she tweeted, "This article is misinformed. I'm not attending the Houston event due to previously scheduled presidential campaign events. However, I''m hoping to meet PM Modi on his visit to discuss the importance of maintaining the strong partnership of the world's oldest & largest democracies."

The White House had confirmed that the US President Donald Trump will be making a joint appearance with Prime Minister Modi at the "Howdy Modi" event in Houston.

The mega event is believed to be one of the largest events to welcome a foreign head of government ever in the history of the United States.

It will mark the first time that the two leaders would meet outside of either capital Washington DC or New York, where the United Nations is headquartered.

Over 50,000 people have already been registered for the event, which will be hosted by the Texas India Forum.

Moreover, the fact that House Majority Leader Steny Hoyer, the second-highest-ranking Democrat, will also address the gathering, further reflects the strong bipartisan support for the relationship between the two countries.