Video of the Chief Minister's speech was posted online by Congres's Randeep Singh Surjewala, who described the comments as indicative of "the mindset of the BJP" 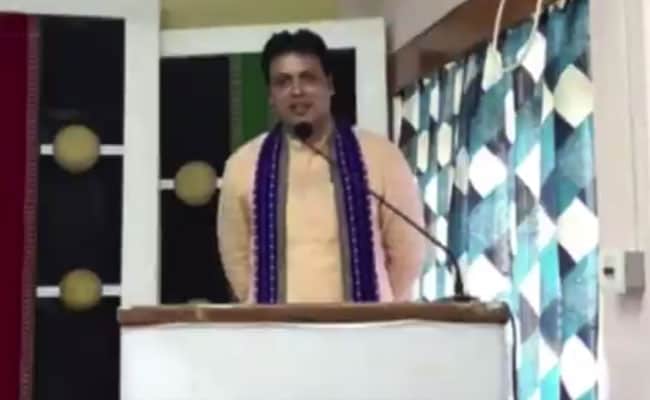 Tripura Chief Minister Biplab Deb talked himself into a controversy after shocking comments that painted stereotyped caricatures of Haryana's Jats and the Bengalis.

"Haryana has many Jats. Haryana's Jats lack brains but are brawny. They can't match Bengalis in brains. Bengalis are known all over India for being intelligent," Mr Deb declared.

A 50-second video of the Chief Minister's speech was posted online by Congress spokesperson Randeep Singh Surjewala, who described the comments as indicative of "the mindset of the BJP".

"This is the right mindset of the BJP. Why are Khattarji and Dushyant Chautala chupp (silent)?" he asked, referring to the Haryana Chief Minister and his deputy.

"Where are Modiji and Naddaji (the BJP President)? Apolgise, take action," he added.

Mr Deb has a penchant for making contentious and eyebrow-raising statements.

In November last year he claimed the Mughals intended to destroy Tripura's cultural wonders of the state by "bombing" its art and architecture.

The year before Mr Deb claimed that the internet and satellite communication existed in the days of the Mahabharata. "The Europeans and the Americans may claim it is theirs, but it is actually our technology," he declared.

Also in 2018 Mr Deb said oxygen levels in bodies of water "automatically" rise if ducks swim in them and that he wanted to distribute ducks among villagers to boost the rural economy.

"Being Killed Inside Their Homes, Government Offices": Omar Abdullah