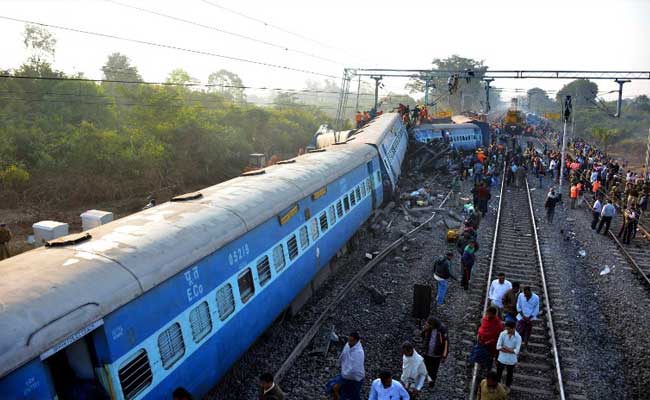 The Hirakhand Express derailed near Kuneru station in Andhra Pradesh

New Delhi: Hinting at the possibility of sabotage in the recent spate of train derailments, Railway Minister Suresh Prabhu has written to Home Minister Rajnath Singh seeking a detailed investigation by the National Investigating Agency into the incidents.

In a letter dated January 23 to the Home Minister, Mr Prabhu sought an NIA probe into the recent spate of train mishaps and listed six incidents of "possibility of criminal interference by outsiders".

In the letter, he made a mention of Hirakhand Express derailment near Kuneru station in Andhra Pradesh, two goods trains that went off the track earlier this month on the Koraput-Kirandul section, the instance of a "cooker bomb" at Ghorasahan station, detection of deep cuts on tracks near Kanpur on January 1 and the obstruction on tracks on a rail bridge between Barauni-Samastipur stations on Monday.

Citing the derailment of Indore-Patna Express in Kanpur in which around 150 people were killed, he said: "Bihar police unearthed a conspiracy to train some persons to tamper with railway tracks to cause train derailments and (their) possible involvement in the accident near Kanpur."

The minister has also directed railway security personnel to be careful and sought cooperation of the public to give information of any unusual activities by anti-national elements near stations to law enforcement agencies.

On January 1, Railway Protection Force Director General SK Bhagat had written to the CBI requesting for a probe into the suspected involvement of outsiders in making deep cuts on tracks near Kalyanpur, Mandhana stations near Kanpur.

Promoted
Listen to the latest songs, only on JioSaavn.com
There is a marked increase in derailments in the recent past with strong indications of "outside interference" on track to derail trains on busy routes, according to railways.

A major mishap was averted last night by an alert loco pilot of Jan Shatabdi Express who saw a 15-feet rail piece on the track and stopped the train near Diwa in Mumbai.

Watch: Hero Cops Save Man From Falling Under Train At Tamil Nadu Station