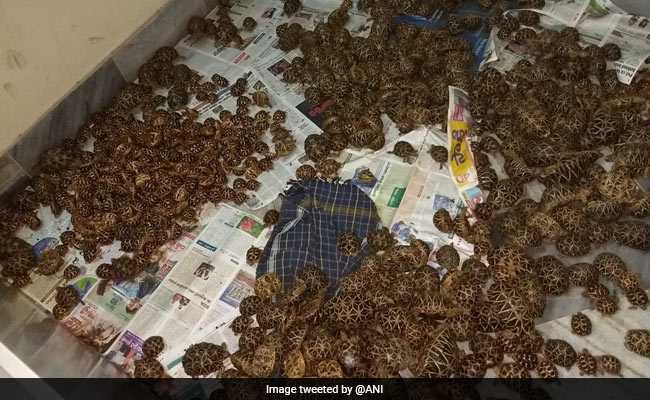 The star tortoises have been handed over to forest officials

More than 1,100 endangered Indian star tortoises, meant to be smuggled to Bangladesh, have been seized from three passengers of a train at Visakhapatnam railway station in Andhra Pradesh by DRI officials, the agency said on Sunday.

The three travelling by the Yashvantpur-Howrah Express from Vijayawada to Howrah were apprehended after the tortoises were found in their baggages on Saturday, a release from the Directorate of Revenue Intelligence's Zonal unit in Hyderabad said.

DRI officers from Visakhapatnam Regional Unit carried out the search following a specific intelligence that the star tortoises meant to be smuggled were being illegally transported.

As many as 1,125 star tortoises, kept concealed in the cloth bags, were seized and later handed over to forest officials, the release said.

The three passengers told the officials that they were given the tortoises by someone hailing from a place near Madanapalli in Andhra Pradesh for being handed over to his accomplice in Howrah for being smuggled to Bangladesh.

The Indian Star Tortoises, protected under the Convention on International Trade in Endangered Species and declared vulnerable by the International Union for Conservation of Nature, are prohibited for export under the Foreign Trade Policy, the release added.