"Those Whose Names Are Not On Assam List Are Intruders," Says Amit Shah

Amit Shah said that the National Register Of Citizens is a matter of national security for the party. 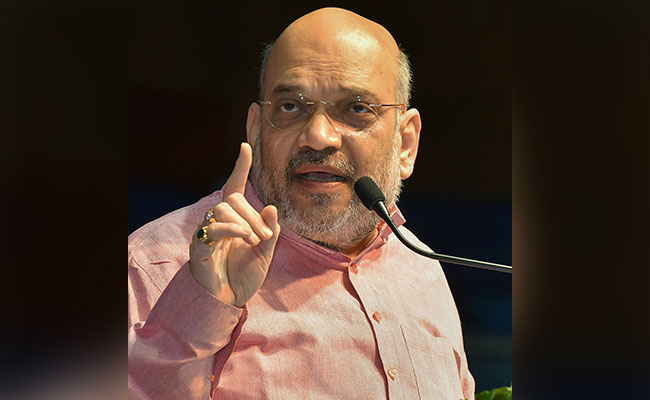 BJP President Amit Shah on Tuesday said that those whose names are not in the draft National Register of Citizens (NRC) in Assam are "intruders" as they have failed to prove their Indian citizenship, and asked the political parties opposing it to clear their stand.

Addressing a press conference in Delhi, Mr Shah also hit out at West Bengal Chief Minister Mamata Banerjee for her "civil war" remarks and also took on those terming the NRC as violation of human rights, saying the use of the country's resources by Bangladeshi intruders is human rights violation of crores of Indians.

"Those, whose names are not in the list are intruders but this is not the final one. They can raise objections and appeal and will have to complete the procedure then it will be decided whether their name will be in the list or not," he said.

Mr Shah said that the NRC is a matter of national security for the party and accused the opposition of indulging in vote bank politics.

"For BJP the matter of NRC is an issue of national security. Our top priority is to safeguard our borders. To implement Supreme Court's order in full stop and comma is the firm stand of BJP government," he said.

Reminding the Congress that the NRC was their idea, he said: "The Assam Accord was signed by then Prime Minister Rajiv Gandhi on August 14, 1984. I want to ask the Congress: how can you raise questions about the NRC today?" Mr Shah said.

Attacking the opposition parties for creating confusion over the first list of the NRC, Mr Shah said: "Congress, Trinamool Congress and other parties who are speaking against NRC Assam should clear their stand on Bangladeshi infiltrators."

The Bharatiya Janata Party (BJP) leader, who is also a Rajya Sabha MP, said the entire process of NRC was done under the supervision of the Supreme Court and the most transparent process was used to prepare the list.

Slamming the Congress for not completing the NRC, Mr Shah said: "You didn't have the guts to prepare the list and send back the infiltrators. For vote bank politics, how can you question the NRC procedure?"

He also said that the Congress is known for changing its stand on political issues. "We ask Congress to clear their stand and not indulge in vote bank politics," Mr Shah said.

He said that no country can function if it keeps on allowing infiltrators. "BJP will implement the NRC Assam under the supervision of Supreme Court," he said.

The BJP President said that the opposition parties are talking about human rights violations.

NRC has been brought to protect human rights of all citizens, he said.

He also accused the opposition parties of trying to portray the BJP as a party trying to divide the country. "But I would like to remind them that Assam Accord was signed by Rajiv Gandhi."

Criticising TMC chief Mamata Banerjee for her civil war remarks, the BJP chief said: "To win elections you are compromising with national security. You are spreading lies. Doing so, you have broken the country once. You are talking about civil war. You should clarify how there is going to be a civil war."

"This is a sensitive issue. It's a matter of law and law will take its own course. Mamata Banerjee is raking it up for political gains," he said.

Ms Banerjee, who is on a three-day visit to Delhi attacked the Narendra Modi government over the NRC, saying people are being victimised to win elections and it would lead to a bloodbath and civil war.