Addressing a rally at the Government Inter College grounds here, Yogi Adityanath slammed the opposition for politicising his visit to the Taj Mahal. 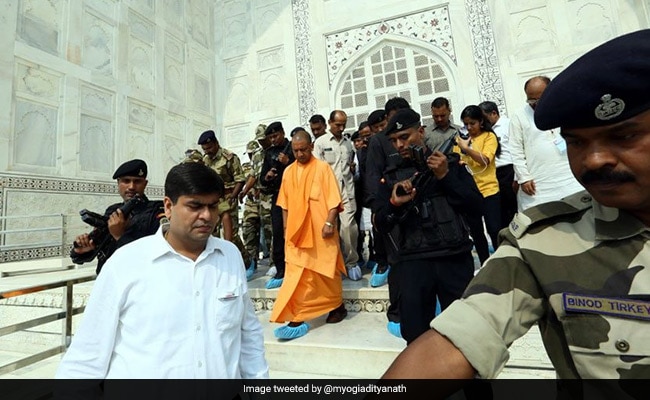 Yogi Adityanath said no one should go into the details of why, when and how Taj Mahal was built (File)

Agra: Terming the Taj Mahal as "India's gem", Uttar Pradesh Chief Minister Yogi Adityanath said today that the Mughal-era monument is "an integral part of our culture" and the government is committed to its conservation.

Addressing a rally at the Government Inter College grounds here, Yogi Adityanath slammed the opposition for politicising his visit to the Taj Mahal.

Before addressing the rally, Chief Minister Yogi Adityanath swept the road outside the Taj Mahal and then went inside the monument in a damage control exercise following the controversy over its place in Indian heritage.

The much publicised visit, the first by the BJP Chief Minister of the state, comes days after the party's leaders and ministers made provocative statements against the famed symbol of love.

"People should not pay heed to what others are saying. The Taj Mahal is an integral part of our culture and the government is committed to its conservation," Chief Minister Yogi Adityanath told reporters after the rally.

In his address at the rally, Chief Minister Yogi Adityanath said, "We should not delve deeper into the details of why, when and how the Taj Mahal was built, but what is important is that it was built by the wealth and hard work of India's farmers, labourers."

"The Taj Mahal is India's gem and a gift to the world. It attracts lakhs of tourists worldwide. It gives Agra recognition and creates employment opportunities," he said at the rally.

Hitting out at those objecting to his Agra visit, Chief Minister Yogi Adityanath said people making such remarks were those who have divided the society on caste lines.

"They had kept the state from development by dividing the people, patronising criminals and indulging in corruption. I feel sorry for their thinking," he said.

"They always ignored Agra and when our tourism ministry is working very hard to put the city on the international tourism map, they are raising unnecessary objections," the Chief Minister said.

"If we develop the infrastructure and facilities, this number can reach 2.5 to 3 lakh. Our government is committed to develop Agra as an international tourist hub. These developments not only increase tourism but also create employment opportunities for youths," he said.