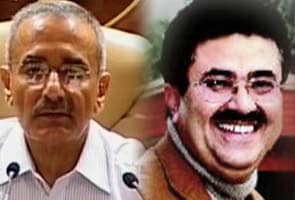 Lucknow: A first information report or FIR has been lodged against two close aides of former Uttar Pradesh Chief Minister Mayawati for allegedly intimidating a petitioner in the Taj Corridor case.

"An FIR has been lodged in the Hazratganj police station against former Cabinet Secretary Shashank Shekhar Singh and Former Secretary to Mayawati Navneet Sehgal and two others based on a complaint filed by Anupama Singh," Additional Superintendent of Police Rajesh Kumar said.

The police officer added that the complainant has alleged that the accused were harassing and pressurizing her to withdraw a public interest litigation (PIL) seeking a review of the denial of sanction to prosecute Ms Mayawati in the multi-crore Taj Corridor scam case. Ms Singh had filed the PIL in the Allahabad High Court in 2009.

Issuing a statement, Mr Singh and Mr Sehgal denied all the charges. "In the context of an FIR lodged in the Hazratgunj Kotwali Lucknow, we deny all the allegations levelled by one Smt Anupama Singh as  totally false , baseless and fabricated. None of us have ever met her or talked to her on phone, hence there is no question of threatening her," a statement released by Mr Singh and Mr Sehgal said.

"We have never spoken with the other persons named in the FIR regarding her or the litigation started by her, hence these charges are vehemently denied as baseless and basket of lies," the statement added.

Promoted
Listen to the latest songs, only on JioSaavn.com
The 2002-2003 Taj Corridor project was aimed at upgrading tourist facilities near the Taj Mahal. The total estimated cost of the project was Rs. 175 crore. But the project was abandoned amid allegations of large-scale corruption and after apprehensions that it would endanger the monument.

It was alleged that Ms Mayawati embezzled the money dedicated for this project. In September 2003, the Supreme Court directed the CBI to investigate the Taj Corridor case. Later, the CBI filed an FIR against Ms Mayawati under Section 13(2) of the Prevention of Corruption Act and sought the permission of the then Governor T V Rajeswar to prosecute her. But in June 2007, the Governor rejected the CBI's request.