During the delegation-level talks led by President Kovind and President Maurer, the two sides agreed that terrorism poses a grave challenge to humanity, the President's Secretariat tweeted. 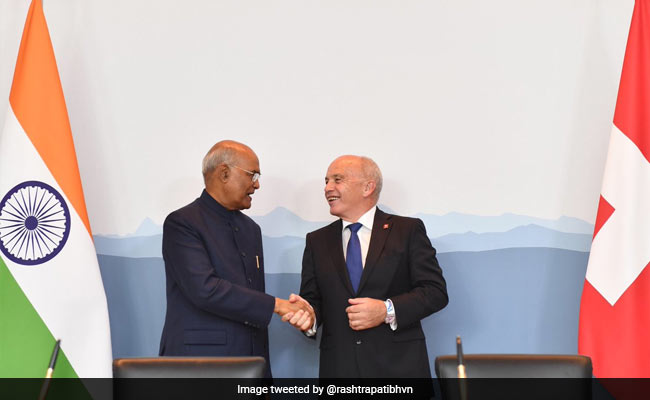 Switzerland on Friday extended its support to India to strengthen its fight against terrorism in all its manifestations as President Ram Nath Kovind held talks with his Swiss counterpart Ueli Maurer and conveyed to him that India has been a victim of state sponsored terrorism for decades.

During the delegation-level talks led by President Kovind and President Maurer, the two sides agreed that terrorism poses a grave challenge to humanity, the President's Secretariat tweeted.

In an apparent reference to Pakistan, President Kovind conveyed to the Swiss delegation that India has been a victim of state sponsored terrorism for decades.

"The Swiss side extended its support to strengthen fight against terrorism in all its manifestations," the President's Secretariat said.

The two countries also signed three agreements on technical cooperation on climate change, science and technology alliance and the renewal of Hindi Chair at the University of Lausanne.

Later addressing the India-Switzerland Business Roundtable, President Kovind said Indian and Swiss startups should collaborate to add value to each other.

"We are home to the third largest Start-up network in the world with over 21,000 enterprises. Our 30 unicorns are valued at over 90 billion US dollars. Swiss Start-up ecosystem is equally impressive. We must join hands and add value to each other," he said.

The President noted that Swiss business is increasingly engaging India. "Today, there are over 250 Swiss companies present in India. It includes different business models - from sales to manufacturing for exports to third countries. This operational diversity reflects the confidence of Swiss investors in the Indian economy," President Kovind said.

Switzerland is home to high-end technology and India is producing world class human capital, he said, adding, the "two economies are highly complementary".

President Kovind, who reached Berne on Thursday, is on the second leg of his nine-day three-nation tour to Iceland, Switzerland and Slovenia.