Rajya Sabha nominations today: Swapan Dasgupta, who had quit his membership to contest the West Bengal Assembly election, and eminent lawyer Mahesh Jethmalani are both nominated. 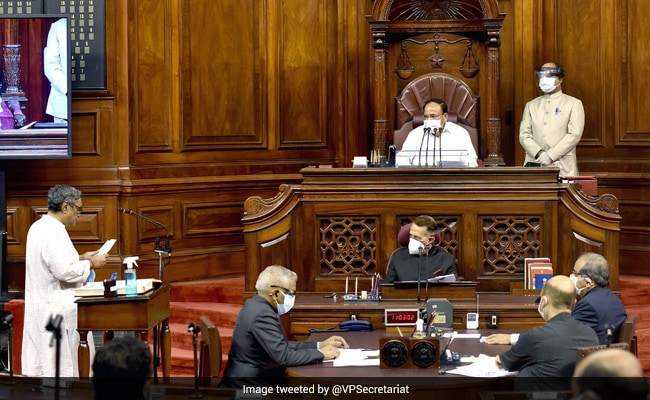 Four new members of Rajya Sabha, including Swapan Dasgupta and Mahesh Jethmalani, took oath on Tuesday, with Chairman M Venkaiah Naidu, noting that the public representatives have a great role to play during the challenging times of the ongoing pandemic.

The other two members were John Brittas (CPI-M) and V Sivadasan (CPI-M), both elected from Kerala.

Mr Dasgupta, who had quit his membership to contest the West Bengal Assembly election, and eminent lawyer Mahesh Jethmalani are both nominated.

Mr Sivadasan took oath in Malayalam, while others chose English.

Congratulating the new members, the Chairman said the oath-taking ceremony is usually held in his chamber, but was held in the Rajya Sabha chamber due to the prevailing pandemic situation while adhering to Covid-appropriate behaviour.

"The oath or affirmation has been arranged now as the convening of the next session will take some time," the Chairman noted.

While the Monsoon session is due to be held in July, Parliamentary Affairs Minister Pralhad Joshi told PTI on Tuesday that the government is hopeful it will begin on its normal schedule.

Since the pandemic began, three sessions of Parliament were curtailed and the winter session last year had to be cancelled.

Last year, the Monsoon Session, which usually starts in July, had begun in September.