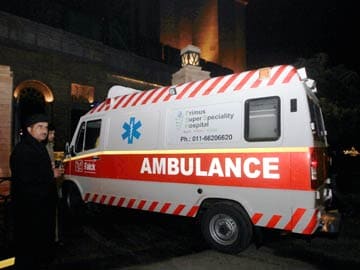 New Delhi: Shashi Tharoor, union minister of state for human resource development, has been admitted at Delhi's All India Institute of Medical Sciences or AIIMS this morning after complaining of chest pain.

On Friday evening, the 57-year-old minister found his wife Sunanda Pushkar Tharoor dead in her suite at the plush Leela Hotel in Delhi's Chanakyapuri.

Mr Tharoor returned at about 8:30 pm after spending the day at a mega-conclave organised by his party, the Congress. When his wife did not open the door to the bedroom of her suite no 345, he asked the hotel staff to help him enter the room, only to find her lying dead on the bed. (Condolences pour in on Twitter)

According to the Press Trust of India, Mr Tharoor's assistant, Abhinav Kumar, informed the police at around 9 pm that Mrs Tharoor had been found dead.

The minister and his wife had checked into The Leela because their home was being painted, the assistant said. (Read: PM speaks to Shashi Tharoor, condoles wife's Sunanda's death)

Sunanda Tharoor had reportedly contacted the hotel staff at about 3.30 pm on Friday to order lunch.

At about 8 pm, Mr Tharoor had tweeted that he would not attend the Jaipur Literature Festival that began on Friday because his wife was unwell.

On Wednesday, in a series of tweets, Mrs Tharoor, 52, had accused a Pakistani reporter, Mehr Tarar, of "stalking" her husband.

That evening she told NDTV's Group Editor Barkha Dutt on the phone that she was at the Leela and that she planned to seek a divorce and was "heart-broken", details not reported by NDTV because it was seen as a private matter. (Blog: I wish Tharoors happily ever after, says Pakistani journalist)

In a phone interview on Thursday, she said she was happily married, but reiterated her charges against Ms Tarar.

Promoted
Listen to the latest songs, only on JioSaavn.com
The couple then issued a statement which said they are "happily married" and intend to stay that way." The statement added that Mrs Tharoor was unwell and sought privacy from the media. (Happily married and intend to remain that way: Shashi Tharoor, wife Sunanda after Twitter row) | (Read: Full statement by Shashi Tharoor and his wife Sunanda after Twitter controversy)

The police have not yet said what caused Mrs Tharoor's death. They recorded the minister's statement after midnight. A post-mortem will be conducted today.