Priyanaka Gandhi is likely to hold a review meeting with district chiefs of the area at the guest house, he said. 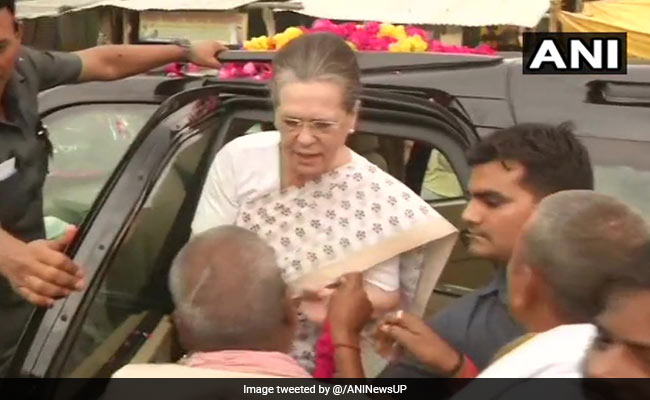 However, the duo is unlikely to visit the neighbouring parliamentary constituency of Amethi, from where Congress president Rahul Gandhi lost the Lok Sabha polls.

This is the first visit of the two leaders to Raebareli after the constituency re-elected Sonia Gandhi to Parliament in the recently-concluded polls.

Priyanka Gandhi, the Congress general secretary in-charge of eastern Uttar Pradesh, was likely to hold a meeting with the party''s district chiefs from the area at the guest house, he said.

The thanks-giving ceremony will take place in the evening, for which over 2,500 party workers had been invited, Mr Singh said.

In the just-concluded polls, the Congress suffered one of its worst defeats in the politically crucial state of Uttar Pradesh, which sends 80 members to the Lok Sabha.

Rahul Gandhi lost to Union minister Smriti Irani of the Bharatiya Janata Party (BJP) from his family stronghold of Amethi by a margin of 55,120 votes. In the 2014 Lok Sabha election, the Congress chief had defeated Irani by a margin of over 1.07 lakh votes from Amethi.

However, the grand old party was able to retain Rae Bareli -- the only seat it won in Uttar Pradesh -- with Sonia Gandhi defeating BJP's Dinesh Pratap Singh by a margin of 1,67,178 votes.

Congress leaders said Priyanka Gandhi Vadra, who was given the charge of eastern Uttar Pradesh ahead of the Lok Sabha election, was holding a meeting to review the party's poll performance with its district unit chiefs and candidates.

"As of now, their (Priyanka and Sonia) visit to Amethi seems unlikely," one of them said.

Earlier in May, Sonia Gandhi had said she was ready to sacrifice everything to safeguard the basic values of the country as she thanked the people of Raebareli for re-electing her.

"I promise you that to safeguard the basic values of the country and to uphold the tradition of the ancestors of the Congress, I will not step back from sacrificing whatever I have got," she had written in a letter addressed to the voters of her constituency.

"I know that the coming days are going to be very tough, but I am fully confident that with the power of your support and trust, the Congress will meet every challenge," she had said.

Referring to the people of her constituency, the United Progressive Alliance (UPA) leader had said she had always tried to look after this extended family.

"Like every Lok Sabha election, this time also you have reposed your faith in me. I am thankful to each and every Congress worker and friends from the SP, BSP, Swabhiman Dal for the hard work put in for my win," Sonia Gandhi had said.

"My life is an open book in front of you all. You are my family. I derive strength from you and this is my real asset," she had added.

The Congress leader had also thanked the Samajwadi Party (SP) and the Bahujan Samaj Party (BSP), which did not field any candidate against her in the Lok Sabha polls.