On Sonam Kapoor's 32nd birthday, Anil Kapoor shared a stunning poster of his 'warrior princess' along with a heartwarming message 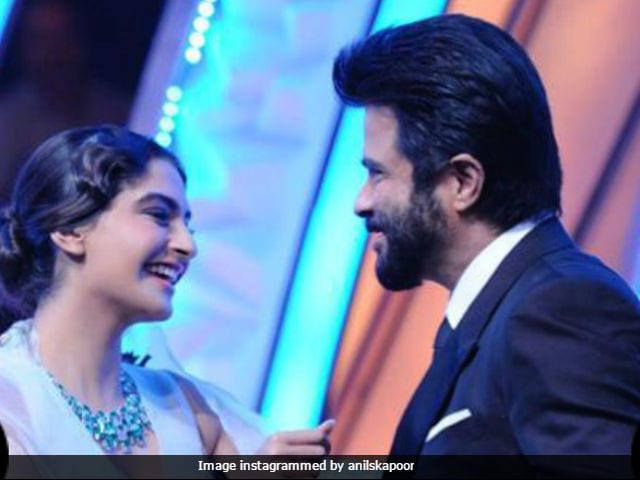 New Delhi: Actress Sonam Kapoor is celebrating her 32nd birthday today and wishes have been pouring in for her from all her fans and colleagues. Celebrities including her father Anil Kapoor extended his best wishes for her on social media. The 60-year-old actor shared a stunning portrait of his 'warrior princess' along with a heartwarming message. "Today is a celebration of that memory and of the person who gave me the gift of fatherhood for the very first time," wrote Anil Kapoor. "You are my very own warrior princess & I believe in you just as fiercely as you stand by your beliefs," he added. See the beautiful portrait shared by Anil Kapoor here:

You can never forget that moment when you hold your child in your arms for the first time...For me, today is a celebration of that memory and of the person who gave me the gift of fatherhood for the very first time... Happy Birthday @sonamkapoor ! Keep smiling, shine brighter, be happier! You are my very own warrior princess & I believe in you just as fiercely as you stand by your beliefs...Love you beta!

Sonam Kapoor's rumoured boyfriend Anand Ahuja also shared two boomerang videos on Instagram, giving us a glimpse of her birthday celebration. In one of the videos, Sonam is seen playing mini-golf and her name features in the background.

Veteran actress Shabana Azmi, who co-starred with Sonam Kapoor in the 2016 movie Neerja, also extended her best wishes to her. "Continue to dare!," wrote the 66-year-old actress.

Abhishek Bachchan also wished his Players and Delhi-6 co-star on Twitter and reminded her of their 'pending butter chicken meal.'

Here's wishing a very happy birthday to @sonamakapoor . Hope u have an even better year than the last 1.Our butter chicken meal is pending.

Happy birthday you beautiful beautiful child!!! May you have every joy and all the love- because u deserve that and more! @sonamakapoorpic.twitter.com/ZNewkZlegD

She redefined fashion for this generation, she won a National Award & its her Birthday . Have a great one @sonamakapoorpic.twitter.com/qwXlUuCbkA

On May 3, Sonam Kapoor won her first National Award for Neerja. The actress received a Special Mention for her role as the late Pan Am purser Neerja Bhanot.

"It took me quite a long time to develop a voice, and now that I have it, I am not going to be silent." -Madeleine Albright @thehouseofpixels

Promoted
Listen to the latest songs, only on JioSaavn.com
Sonam Kapoor is currently shooting for R Balki's Padman along with Akshay Kumar. The film also stars Radhika Apte. She will also be seen in Sanjay Dutt biopic, directed by Rajkumar Hirani.