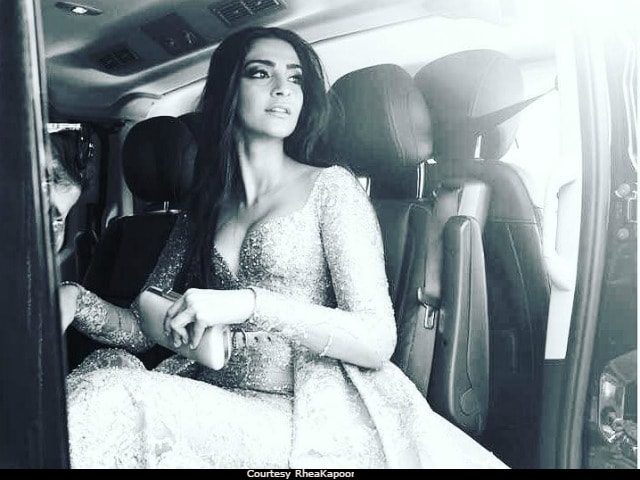 New Delhi: Sonam Kapoor made her Cannes red carpet finale with a golden appearance on Monday night. Apart from fans and followers of the Bollywood fashionista, her red carpet looks have also been admired by her rumoured boyfriend, entrepreneur Anand Ahuja. There's proof on Instagram. Sonam's sister, stylist Rhea Kapoor shared a BTS photograph of Sonam in Elie Saab couture on Instagram, which was promptly spotted and admired by Anand. He reviewed Sonam's golden red carpet look in just one word. Read on for more. Anand might not have accompanied Sonam to the French Riviera but followed her Cannes diary through the days of her stay - Sunday and Monday. May 21 marked Sonam's first day in Cannes, when she was spotted on the beach looking radiant in a metallic-hued sari by Norblack Norwhite and a crop top. That too, Anand Ahuja listed as his favourite. When Anand had no words to describe Sonam's look.

Earlier this year, Anand Ahuja was part of Sonam's fam-jam at the National Awards. He was spotted sitting right next to the actress at the venue in Rashtrapati Bhavan, where Sonam received a Special Mention National Award for her performance in Neerja. Sonam was also accompanied by her parents, father Anil Kapoor and mother Sunita at the ceremony. Anand was perhaps the loudest one to applaud when Sonam received her award from President Pranab Mukherjee while Mr Kapoor was busy documenting the special moment on phone.

#Bollywood Sonam Kapoor's proud boyfriend Anand Ahuja was a reflection of her joy at the 64th National Awards -... https://t.co/fBXJsfWD5dpic.twitter.com/7cZ8xWlGCo

Sonam Kapoor opted for Elie Saab ensembles for both her red carpet appearances. On the first day, she was spotted in pastel pink and followed it up with a similar gold outfit on Monday. For her day-time attires, she made appearances in outfits from the studios of Anamika Khanna, Abu Jani-Sandeep Khosla and Masaba Gupta. BTW, Sonam is also often spotted in Bhane couture, the clothing label Anand Ahuja owns. Closing out the daytime whirlwind that is #cannes2017 press with @lorealmakeup in cool kid @masabagupta custom cropped trouser sari.#beachglamour

The resort look of my dreams, made for the French Riviera and ofcourse for @sonamkapoor #lorealparisindia #cannes2017 #lifeatcannes