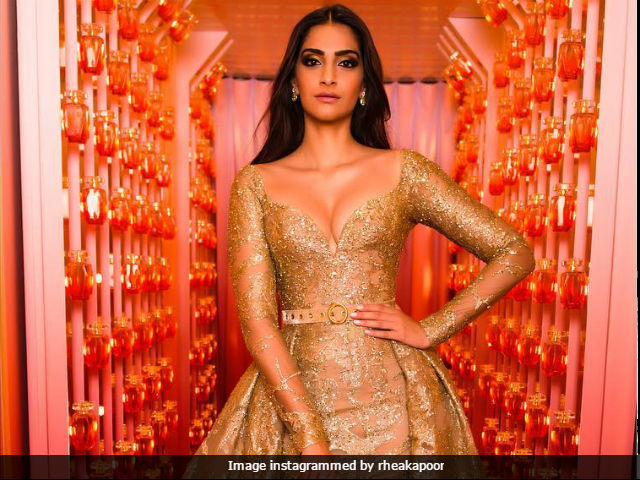 New Delhi: Actress Sonam Kapoor has closed her stint at the Cannes Film Festival with a second appearance on the red line in a gold Elie Saab gown. The 31-year-old actress accessorised with diamond earrings by Chopard. She was attending the screening of The Meyerowitz Stories. Her sister Rhea, who is also styling her, posted picture of Sonam Kapoor in her gold dress on Instagram. This is Sonam's seventh year at Cannes and, before leaving Mumbai some days ago, she told the press that her intention this time is simply to have 'a good time' on the red carpet and that she hadn't 'prepared much' in terms of wardrobe. Here's what that looks like when you are Sonam Kapoor.

Sonam Kapoor is at Cannes on behalf of cosmetics giant L'Oreal and posed for pictures with her fellow spokesmodels, actresses Eva Longoria and Andie MacDowell.

This was Sonam's second Elie Saab look. On Sunday, she walked the red carpet in a somewhat similar dress.

Dreaming in pastels and golds

Sonam Kapoor started her second day at Cannes in an Anamika Khanna ensemble that consisted of a red cape over rather garish mustard separates.

As the day progressed, Sonam opted for softer hues. For her second appearance, Sonam wore a white dress with a blue shaded kaftan designed by Abu Jani-Sandeep Khosla.

The resort look of my dreams, made for the French Riviera and ofcourse for @sonamkapoor #lorealparisindia #cannes2017 #lifeatcannes

Promoted
Listen to the latest songs, only on JioSaavn.com
Sonam Kapoor was preceded at Cannes by her co-ambassadors for L'Oreal, Deepika Padukone and Aishwarya Rai Bachchan. Deepika Padukone made her debut as the brand ambassador this year.

Earlier this month, Sonam Kapoor won a National Award (Special Mention) for her performance in 2016 movie Neerja. She is currently shooting for R Balki's Padman along with Akshay Kumar. Sonam Kapoor is expected to soon begin filming for Shashanka Ghosh's Veerey Di Wedding. The film also stars Kareena Kapoor Khan and Swara Bhaskar in lead roles. She also launched Rheson, a fashion label she co-owns with sister Rhea, before leaving Mumbai for Cannes.