"This person had said that he's not concerned about Budget. I'm not surprised because Budget mentions Aatmanirbhar Swasth Bharat Yojana," Smriti Irani said 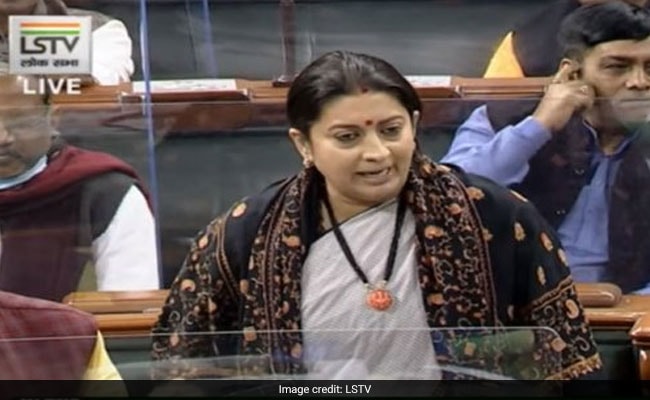 Union Minister Smriti Irani on Thursday slammed Congress leader Rahul Gandhi who talked against farm laws during the discussion over Union Budget in the Lok Sabha, saying "those who supported slogans calling fragmentation of India can never support Budget dedicated to the country."

Speaking at Lok Sabha with intense rage and aggression she added, "It is not acceptable for this gentleman (Rahul Gandhi) to discuss Budget in this House. The budget is to make India self-reliant, to connect India. Those who supported slogans calling for fragmentation of India can never support Budget dedicated to India."

Hitting at Lok Sabha MP from Wayanad, Ms Irani added, "I was surprised that this person spoke of farmers and leveled allegations on government. I was surprised because he never gets involved in the discussion of the system in the region from where he was an MP (from Amethi) even though he expresses concerns about the mandi system in that region."

"This person refused to discuss Budget, he'll have to go to Amethi one day. Women from 3 lakh poor families of Amethi defecated in open. He never built a toilet for them. 10 crore poor families, including 3 lakh from Amethi, got access to toilets for 1st time in life," Ms Irani said.

"This person had said that he's not concerned about Budget. I'm not surprised because Budget mentions Aatmanirbhar Swasth Bharat Yojana. He's not concerned even when there wasn't a CT scan facility at hospitals of his constituency when he was an MP there," Ms Irani said while taking a dig at Mr Gandhi.

Congress leader Rahul Gandhi on Thursday alleged that the new farm laws brought by the government will lead to "collapse of mandi system, allow unlimited hoarding and prevent farmers from moving courts".

Participating in the discussion on the union budget in Lok Sabha, Mr Gandhi said he was speaking on the "content and intent" of three farm laws to which Prime Minister Narendra Modi had referred in his speech on Wednesday.