Sikh Jawan Tied Turban On Bleeding Leg Of Soldier, Got Shot, Both Survive

Balraj Singh of the elite Commando Battalion for Resolute Action (CoBRA) and the man he saved, Sub Inspector Abhishek Pandey, are both in hospital in Raipur. 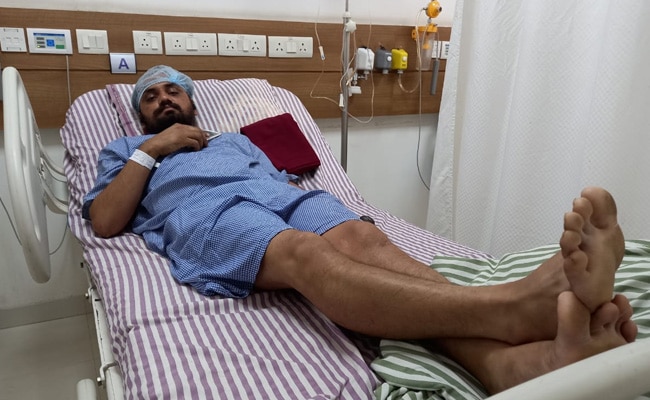 As gunfire raged around them in the deadly ambush of security forces by Maoists in Chhattisgarh on Saturday, a Sikh jawan yanked off his turban to tie it around the wound of a fellow soldier and stop the bleeding. Moments later, he was also shot.

Balraj Singh of the elite Commando Battalion for Resolute Action (CoBRA) and the man he saved, Sub Inspector Abhishek Pandey, are both in hospital in Raipur.

22 security personnel were killed in action in a "u-shaped" attack by some 400 Maoists at the border between the Sukma and Bijapur districts. The CRPF (Central Reserve Police Force) soldiers were severely outnumbered and surrounded.

Balraj Singh, who was shot near his abdomen, said: "Our first-aid man was busy he was attending to the Special Task Force personnel. At that time our sub-inspector sir (Abhishek Pandey) was wounded from the splinters of a grenade. He was bleeding profusely; I took off my turban and tied it around his wound. The encounter lasted almost five hours, they used UBGL, Mortars ... many Naxals were also dead."

Lying in hospital, he shared more details of the attack: "I think more than 20 Naxals were dead. We chased many of them away. They were firing from all sides, but we broke the ambush with a box formation from two sides. Some 210 CoBRA attacked the Naxals and we evacuated the injured."

Sandeep Dwivedi, the second-in-command of the CRPF (Central Reserve Police Force) is also recovering in hospital in Raipur. "We had left for the operation at night following information about the presence of Maoists. We reached early morning. When we were returning, the encounter started. The Maoists had information about the movement of security forces. Our boys fought bravely but we suffered losses. They also suffered heavy losses. Their civilian team that does the recce was tracing us and that's why they took position accordingly," he said.

In one of the worst such strikes on security forces, the CRPF lost eight soldiers including seven commandos of the CoBRA battalion and one jawan of the Bastariya battalion. Eight personnel of the District Reserve Guard (DRG) and six of the Special Task Force (STF) also died in the line of duty.