The Shiv Sena and its youth wing Yuva Sena today organized a protest over the loss of the semiconductor project at Talegaon in Pune district, the site where it was supposed to come up. 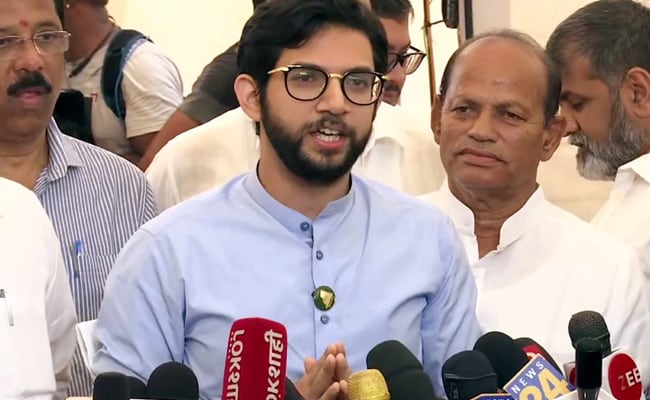 The Shinde government wasn't a 'sarkar' but a circus, said Aditya Thackeray. (File)

Shiv Sena leader Aaditya Thackeray today lashed out at the Eknath Shinde-led state government for Vedanta-Foxconn's decision to set up its semiconductor plant in Gujarat instead of Maharashtra.

The project went out of Maharashtra after the Shinde-led rebel Shiv Sena MLAs toppled the Maha Vikas Aghadi government headed by Uddhav Thackeray, he said.

The Shiv Sena and its youth wing Yuva Sena today organized a protest over the loss of the semiconductor project at Talegaon in Pune district, the site where it was supposed to come up.

"Rebel legislators betrayed not just the party but even the state's youth by enabling the Vedanta-Foxconn project to go out of the state," Aaditya Thackeray said, addressing the protesters.

The Shinde government wasn't a 'sarkar' but a circus, he quipped. Even its industry minister didn't know that the state had lost the Vedanta as well as a bulk drugs park project, he claimed.

"After the collapse of the Maha Vikas Aghadi government, the Vedanta project also went out of the state. Those who betrayed the Shiv Sena first went to Gujarat before going to Guwahati," Aaditya said.

Mr Shinde, a senior Sena leader, and the MLAs who supported him had camped in Guwahati for around ten days after he rebelled against Uddhav Thackeray in June.

"I don't blame the Gujarat government or the Centre (for the loss of the project). It is this state government which allowed the project to slip out of Maharashtra," Aaditya Thackeray further said.

It had been almost finalized during a meeting at Davos in May this year that the project would be set up in Maharashtra, he claimed.

"During this period, the 40 traitors were planning to rebel," he said, adding that MVA government had offered subsidy of Rs 10,000 crore to Vedanta-Foxconn and Talegaon was a perfect site with good connectivity.