Police says the killers were waiting for Shujaat Bukhari to come out of the building and it appeared to be a planned attack.

Hours after senior journalist Shujaat Bukhari was shot dead in the heart of Srinagar on Thursday evening, the police released security footage of three bikers believed to be the killers.

The faces of all three were obscured, either by a helmet or cloth, and the man in the middle held what appeared to be a sack of weapons.

Releasing the photos on Twitter, the police appealed for public help to help identify the killers. The identity of those providing information would be confidential, said the police.

Mr Bukhari, 50, was shot at close range when he was leaving his office in Press Colony in a relatively safer part of Srinagar, around 7.30 pm.

General public is requested to identify the suspects in pictures involved in today's terror attack at press enclave.#ShujaatBukhari@JmuKmrPolice@spvaid@DIGCKRSGR@PoliceSgrpic.twitter.com/3cXM0CC8BD

His two security guards were also killed in the attack. Mr Bukhari had been protected since 2000, when he survived an attempt to kill him.

The police say the killers had been waiting for Mr Bukhari to come out.

"They were shot before they could react," Jammu and Kashmir police chief SP Vaid told NDTV.

"They (the terrorists) chose the iftar time when everybody was rushing home. We will look into who these people are," Mr Vaid said. 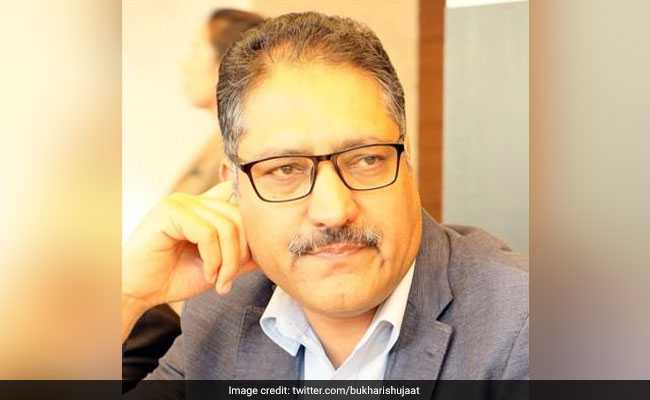 Shujaat Bukhari was shot while coming out of his office in the heart of Srinagar.

On hearing the gunshots, other journalists ran to the spot and found Mr Bukhari's bloodied body slumped over a seat. His two guards were also in the car.

Promoted
Listen to the latest songs, only on JioSaavn.com
After firing multiple shots, the terrorists escaped.