"Ready To Evacuate Indian Students From Ukraine": Russia To UN

During the UN Security Council meeting, Russia's Permanent Representative to the UN Ambassador Vassily Nebenzia said that the Russian military is doing everything to ensure the peaceful evacuation of foreign nationals stranded in Ukraine. 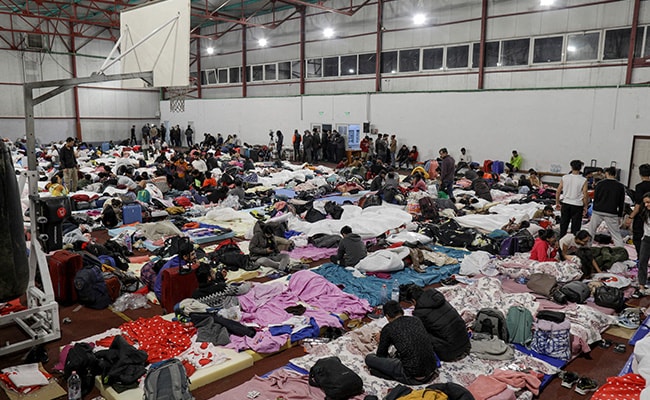 Russia informed UN Security Council that it is ready to evacuate Indians, others from Ukraine

Russia has informed the UN Security Council that Russian buses are ready at crossing points to go to the eastern Ukrainian cities of Kharkiv and Sumy to evacuate Indian students and other foreign nationals who are stranded there, amidst the raging conflict in the East European country.

During the meeting, Russia's Permanent Representative to the UN Ambassador Vassily Nebenzia said that the Russian military is doing everything to ensure the peaceful evacuation of foreign nationals stranded in Ukraine.

He alleged that Ukraine nationalists were keeping over 3,700 Indian citizens "by force" in Kharkiv and Sumy cities of eastern Ukraine.

"In the Belgorod region of Russia, 130 comfortable buses have been waiting (and standing ready) since 6:00 am today at the crossing points 'Nekhoteevka' and 'Sudja' ready to go to Kharkiv and Sumy to evacuate the Indian students and other foreign nationals," he said.

The Russian envoy said that the checkpoints are equipped to provide temporary accommodation, space for rest, and hot food. There are also mobile medical stations with a stock of medications.

"Everyone evacuated will then be taken to Belgorod, and from there transported to their homeland by air," he said.

In New Delhi, responding to reports of Indian students being held hostage in Ukraine, Spokesperson of the Ministry of External Affairs Arindam Bagchi said India has not received any reports of any hostage situation regarding Indian students.

"We have not received any reports of any hostage situation regarding any student. We have requested support of the Ukrainian authorities in arranging special trains for taking out students from Kharkiv and neighbouring areas to the western part of the country," Mr Bagchi said.

India has been coordinating effectively with the countries in the region including Russia, Romania, Poland, Hungary, Slovakia and Moldova. A large number of Indian nationals have been evacuated from Ukraine in the last few days, he noted.

"We appreciate the help extended by the Ukrainian authorities to make this possible. We thank Ukraine's western neighbours in receiving Indian nationals and for accommodating them while they waited for flights to take them back home," Mr Bagchi added.

Meanwhile, during the Council meeting, India's Permanent Representative to the UN Ambassador TS Tirumurti said while the UN Security Council discusses the nuclear dimension of an unfolding conflict, it must acknowledge that there is a "pressing humanitarian crisis confronting us in Ukraine, where safety and security of innocent civilians including several thousand Indian nationals, in particular, students are at stake."

In the first Indian casualty in the war in Ukraine, a 21-year-old fourth-year medical student at the Kharkiv National Medical University Naveen Shekarappa Gyanagoudar from Karnataka was killed in shelling in Kharkiv city on Tuesday morning.

Ukraine's Permanent Representative to the UN Ambassador Sergiy Kyslytsya told the Russian envoy Nebenzia to "please make an appeal to the armed forces (of Russia) to ensure a safe corridor to allow foreign students leave the areas of concern. Stop spreading the lies! You know very well what is going on there if you are indeed in contact with your capital." Mr Nebenzia told the Council that it is not Russian troops that pose a threat to the people of Ukraine, but Ukrainian nationalists.

"They keep the population of some big cities as hostages, they carry out acts of sabotage and provocations…and then afterwards they attempt to blame Russia for that," he said.

Mr Nebenzia accused Western nations of giving protection and patronage to "radicals and extremists" in Ukraine.

In an apparent reference to those nations in the Council that have abstained or not voted against UN resolutions condemning Russia's invasion of Ukraine, Ukraine Ambassador Kyslytsya said "and still shamefully there are a handful of those around us or among us rather, who do nothing. Act now or it might be too late not only for Ukraine but for all of you."

India abstained twice in the UN Security Council on resolutions on Russia's aggression against Ukraine.

The 193-member UN General Assembly this week overwhelmingly voted to condemn Russian aggression against Ukraine and demanded that Moscow "completely and unconditionally" withdraw all of its military forces from the territory of Ukraine.

India abstained on the resolution, which received 141 votes in favour, five against and a total of 35 abstentions.