Listen to Your Heart: The London Adventure'', to be released on Ruskin Bond's 88th birthday, gives readers a peek into the four years he spent in the Channel Islands and England. 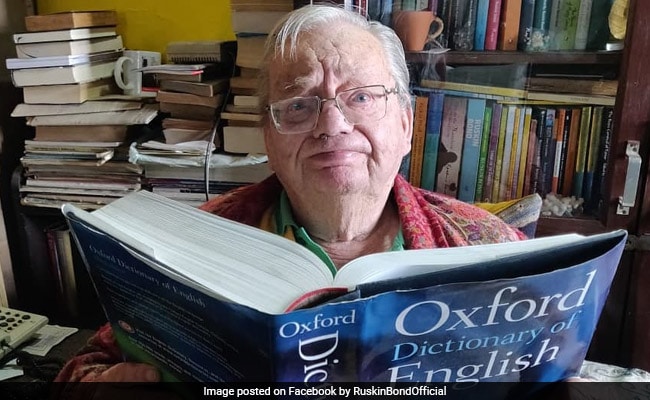 Ruskin Bond's latest book will be released on his 88th birthday. (File)

The doctor has ordered him to go slow on pickle, he has cut down on his quota of vodka and now finds Charles Dickens long and tedious but India's favourite author Ruskin Bond is indefatigable when it comes to putting pen on paper - quite literally.

Mr Bond, who turns 88 tomorrow, has moved from his trusted typewriter to pen and writing pad, his appetite for writing seemingly as strong as that of a 17-year-old -- the age he wrote his debut novel "The Room on the Roof".

Since that first work in 1956, he has written over 500 short stories, essays and novellas along with more than 50 books for children. And there's plenty more from where those came from.

"In India, you don't run out of stories or material of stories because something is happening all the time. There is never a dull moment, not just in the country as a whole but in your own city, small town or village. Life is constantly in a process of change or upheavals," Ruskin Bond told PTI in a phone interview from Landour.

"If you are living in Europe, Britain or America it is monotonous. Everybody is living a similar sort of existence, the same custom, the same language or the same way. Here we have different languages, customs, ethnicity or backgrounds. It's a whole different canvas. Also, I am a compulsive writer." Bond, who calls himself a prolific reader and compulsive writer, still writes for at least an hour every morning.

His latest book, "Listen to Your Heart: The London Adventure'', to be released on his 88th birthday, gives readers a peek into the four years he spent in the Channel Islands and England.

The fifth -- and final - volume of his memoir, it talks about how he muses over his loneliness, switches jobs, falls in love, befriends the ocean and relentlessly chases his big dream of becoming a famous writer.

Born in 1934 in Kasauli, Mr Bond grew up in Jamnagar, Shimla, New Delhi, Shimla and Dehradun. Apart from three years in the UK, he has spent all his life in India.

He lives with his adopted family in Uttarakhand's small cantonment town of Landour, which for years has been attracting fans hoping to have a glimpse of the celebrity author in a tea shop, somewhere on the winding roads or a fleeting look through the window of his home.

Ruskin Bond said he read and wrote way more than usual over the past few years, particularly during the Covid induced lockdown when there was nothing else to do.

"Normally, I would have read three to four books in a month, but then over the last year I read three-four books in a week. And if it was a short novel or crime thriller, I would finish it in one day," he said.

The award-winning author did admit to a change in his literary tastes and said he now likes writing and reading short-stories or crime fiction over big fat novels.

"Now that I am 88 I can't read or write a big fat novel because I may not finish it. So I am working on shorter things. Like writing limericks, essays or enjoy reading crime fiction.

"I read a couple of novels by an old favourite of mine American novelist and short story writer Patrician Highsmith, then I like reading biographies also .. The unknown lives of celebrated writers have always intrigued me," Mr Bond said.

Ruskin Bond also said he no longer feels like reading the same kind of books.

For instance, the complete works of English writer Charles Dickens that he enjoyed as a boy is something he finds "boring" as an old man.

"I can't read Dickens because it's long and tedious, and has got too much description. I prefer short stories...So yes the taste changes when you grow old. Some of the authors that I enjoyed when I was young don't give me the same pleasure now. I have to keep discovering new writers. But the urge to read is always there," he noted. Bond has received numerous awards and honours, including Sahitya Akademi Award for English writing in 1992, the Padma Shri in 1999 and the Padma Bhushan in 2014.

Having achieved so much in his life has the thought of retiring ever crossed his mind? He replied saying a writer like him who gets "no pension or provident fund" can never retire.

".. My bank manager would tell me, 'Mr Bond, your bank balance has fallen very low this month -- which is something that he says very often over the years -- so it has to be replenished'. And the only way I can do it is by writing and getting published," he said in a lighter vein.

Grateful to his loving fans and kind family which fusses over him "like a child", Ruskin Bond said old age can be tough if one has major ailments but he has been lucky that way to keep illness at bay -- that too without taking any serious effort to achieve the same.

"There are no restrictions. But yes since the doctor tells me to cut down on salt, because of my high blood pressure, I try to avoid eating too much pickle which I love.

"Also, like a good boy I have cut down on my two glasses of vodka -- one with lots of orange juice -- to one per day." Published by Penguin Random House India (PRHI), the 104-page "Listen To Your Heart", priced at Rs 299, hopes to be an "inspiration for aspiring young writers, a meditation on embracing fears, seizing every opportunity but most importantly living one's dreams."